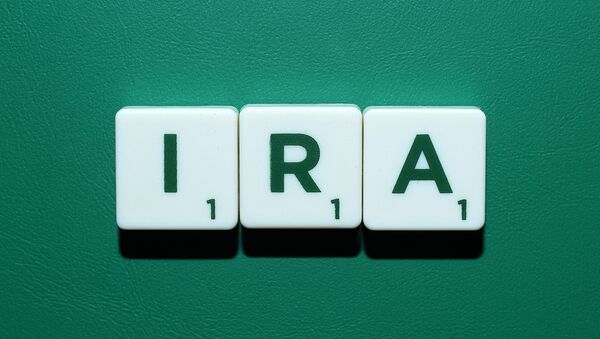 CC BY 2.0 / CafeCredit.com / IRA
Subscribe
In the wake of a car bomb, police claim 'New IRA' could be behind the incident in Derry. With four arrests made there is little information about the motivation of the terrorists. Sputnik spoke about it to journalist and commentator Andree Murphy.

Sputnik: Can you tell me more about the so-called New IRA?

Andree Murphy: Well, I think the first thing is that it's not clear who New IRA are. There has been growing dissident activity that's been unattributed over the past few months across maybe Derry and Belfast in particular. But what we're not saying is sort of claims of responsibility or assignation of blame by the PSNI (Police Service of Northern Ireland).

Royal Marine Who Made Bombs for IRA Splinter Group Is Jailed
So the New IRA has been speculated in the media: are a group of people who've been involved in previous dissident activity. Less so people who are involved previously in the IRA. The IRA campaigns over for 30 years now at this stage you know, so we're seeing younger generation kind of coming through.

But all of that is speculative. Because what we're not seeing is something that we can understand what their objectives are, what their activities are going to look like, and who they expect to gain support from. So it's all a little bit nebulous but as I say what isn't nebulous is that there is on undoubtable activity happening.

So we've seen punishment shootings in Belfast, we've seen the killing of Jim Donegan outside St. Mary's School for Boys, which again is unattributed but lots of speculation that there may have been a distant paramilitary group involved in it.

We've seen bomb scares the likes of New Lodge and now we've seen the bomb going off in and Derry. But the bomb has been considered as rudimentary. That we're not at the scale of say something like Omagh would it be or anything even close to that at the minutes.

Sputnik: On Sunday the media reported that Theresa May could seek to make amendments to the Good Friday Agreement in order to get her Brexit Bill through parliament. Could this lead to more division?

Andree Murphy: In comes Brexit and makes everything unsettled. It certainly makes them settle say from last week if we're going to have a hard boarder: Who's going to police that border? Who's got a police all of the new regimes around your car and around what you have in your car, whatever, it's going to be the PSNI. So everything's a little bit unsettled anyway.

'IRA Man' Faces Trial in Germany 20 Years After Attack on British Army Base
All along. We've seen everyone saying "but the Good Friday Agreement must be upheld", the peace agreement is absolutely primary. In comes, Theresa May and says what all of us suspected: that this Tory government has absolutely no commitment to the Good Friday Agreement. Doesn't care about it and it can be a negotiation within all of the Westminster Brexit turmoil.

And when you have a complete disengagement by London, from the peace agreement, then you have a vacuum that in which military activity of any hue can step in and I think we're in a in a very volatile place. But if we don't come to grips that very, very quickly: it could be very dangerous.

Sputnik: Could this be a return to ‘The Troubles' or do you think the mainstream media could be pushing their own narrative surrounding Brexit by giving so much attention to this car bomb?

Andree Murphy: Two things could be true at once, you know? There's undoubtedly for the first time the mainstream media in the Brexit debate ignored Ireland, ignored the implications for the Good Friday Agreement.

It's only in recent months with the "back stop", with the EU insisting with the Irish government that there would be no shifting on the backstop because of the implications the Good Friday Agreement that you're starting to see people to take notice.

Former IRA Leader, N.Ireland Ex-Deputy First Minister McGuinness Dies Aged 66
So it's only in the past number of weeks they start saying anything. It's only in the past number weeks you start seeing the mainstream media saying anything about the Good Friday Agreement. And along comes this bomb and then everyone is talking about it. Some people will be a little bit suspicious because many of these groups as we know have been infiltrated by state agents at different times.

The other thing that is true is that Brexit does destabilize the good for the agreements. It does cause chaos in terms of day to day lives of people living on their own, in their own country.