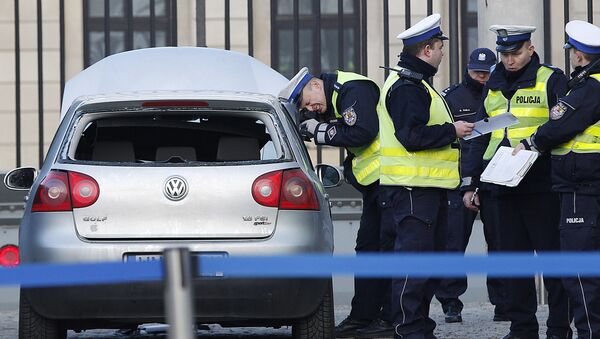 © AP Photo / Czarek Sokolowski
Subscribe
A man was detained after hitting a policeman and ramming the gates of the Polish president’s headquarters.

The car was driving the wrong way down the street, striking a policeman and going straight into a metal barrier around the presidential palace, the Associated Press reported.

Polish president Andrzej Duda said it was an “astonishing” situation, yet emphasised that the palace is guarded and protected. The authorities have concluded that the incident wasn’t an act of terror.

The detained man, 36, was driving a silver Volkswagen with a Warsaw license plate on Tuesday, Warsaw police spokesman Mariusz Mrozek said. The man was hospitalised for exhibiting incoherent behaviour and speech in order to determine whether he was intoxicated with alcohol or drugs.

The police officer was hospitalized as well with cuts and bruises, however, there is no threat to his life, Mrozek said.

The crash came a week after the mayor of Gdansk was fatally attacked on a stage in front of thousands of people by an ex-convict during a charity event. The mayor died of his wounds the following day. The stabbing has raised questions about the security of public officials across the country.