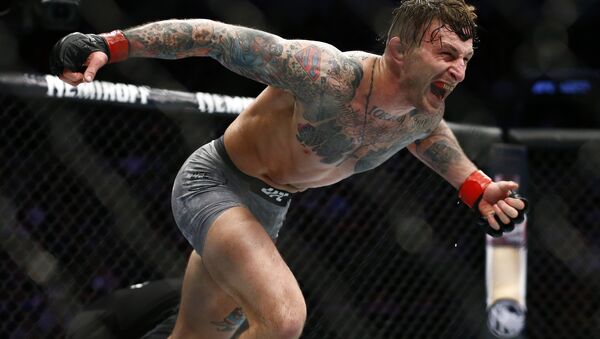 The athlete revealed that he doesn't hold grudge against whoever robbed him of his stuff, but asked the culprit to return certain items from his bag. Earlier, a man who tried to rob female UFC fighter Polyana Viana ended up in hospital after being thrashed by her.

UFC fighter Gregor Gillespie, who holds 15th place among the promoter's lightweight athletes, and one of his coaches were robbed as he was fighting in the octagon in the Barclays Centre with Yancy Medeiros as part of UFC Fight Night 143 in New York. The perpetrator took their bags containing fighting equipment, according the athlete himself, "for some memorabilia".

Gillespie addressed the thief on his Instagram page, telling them that they could keep the bag and the contents, but asked them to return his wallet and mouth guards, noting that he'd hate to have to visit the Department of Motor Vehicles to restore his documents.

His fans supported the fighter on social media, hoping that he would get his bag back. One of them, going under the handle silivesmatter, even called for a boycott of Barclays unless Gillespie gets his stuff back. A user called the_bearded_maestro noted that the thief must have been either "brave or stupid person" to steal from a talented UFC fighter.

"That's a really crappy thing to do to an athlete who worked his ass off Saturday night", a user named mzphotogeek wrote on Instagram.

But, at the same time, those who cheered for his opponent in UFC Fight Night 143 were not that supportive.

Earlier, another UFC fighter, Polyana Viana, also known as the "Iron Lady", revealed that she had recently left a robber in hospital after he attempted to mug her on the streets of Rio de Janeiro. The 27-year-old landed several punches to his face and then grabbed him in a rear-naked choke, making the crook beg for mercy, asking Viana to call the police.