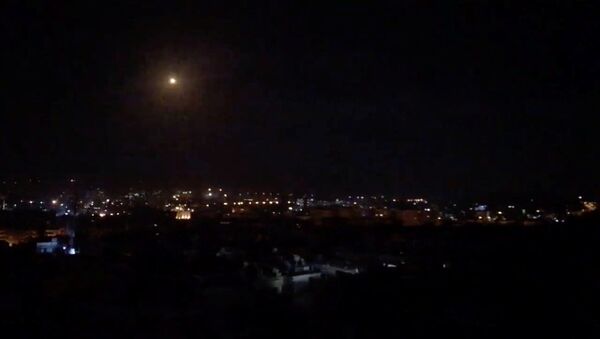 For two days in a row, Israel Defence Forces have been carrying out strikes on what the IDF claims are Iranian targets in Syria.

The Russian military has announced that Syrian air defences had destroyed over 30 cruise missiles and guided bombs, when repelling an Israeli strike.

"On 21 January 2019 from 2:11 until 2:59 Israel Defence Forces carried out three airstrikes on Syrian territory from the west, south-west and south", Russia’s defence control centre reported on Monday.

According to the Russian Defence Ministry, the Israeli strike killed four Syrian servicement and injured 6 others. In addition to this, the air raid has "partially damaged the infrastructure of the Damascus international airport", the statement says.

Shortly after, Israel Defense Forces Spokesman Jonathan Conricus said the IDF had used the communication channel with the Russian military during last night's airstrikes on Syria.

The announcement comes shortly after the IDF press service announced that Israel had targeted alleged "military facilities of [Iranian unit] Quds Force in Syria, including weapons depots, mainly in the area of Damascus International Airport, Iranian intelligence center, Iranian training camp" in response to a missile strike in disputed Golan Heights. According to the IDF, during the raid, dozens of Syrian anti-aircraft missiles were fired, despite an unequivocal warning not to allow open fire.

Following earlier Syrian TV reports after Damascus had been rocked by powerful blasts, a Syrian military source told Sputnik that Syria’s air defences were able to shoot down a significant part of Israeli guided missiles.

This is the second consecutive Israeli air raid against Syria, with the IDF launching a strike in the south of Syria from the Mediterranean Sea after a rocket had fired at the northern Golan Heights that was intercepted by the Iron Dome Aerial Defence System. When commenting on the attack, Israeli Prime Minister Benjamin Netanyahu stated that a series of airstrikes on a Damascus airport on Sunday was in line with Israel’s policy to "oppose Iran’s attempts to gain a foothold in Syria and to hurt those who is trying to hurt us".

Syrian NextGen Buk-M2 Defense System Repels Israeli Attack - Report (VIDEO)
Israel has repeatedly accused Iran of having a military presence in Syria, as well as suspected attempts to build a base there. However, Tehran has strongly refuted the claims, insisting that it's military presence in the country is limited to sending military advisors at Damascus' request to help fight terrorists.

Tel Aviv and Damascus, who have never signed a peace treaty and still remain in a state of war, have repeatedly exchanged tit-for-tat attacks in border territories, including in the disputed region of the Golan Heights, which has been occupied by Israel since 1967 and was formally annexed 14 years later. The UN has repeatedly adopted resolutions criticising the annexation and calling on Israel to return the territory to Syria, with Tel Aviv insisting that the demand is something Israel would never do.