I See What You Did There: PHOTOS of US Warship Sent to Black Sea Surface Online 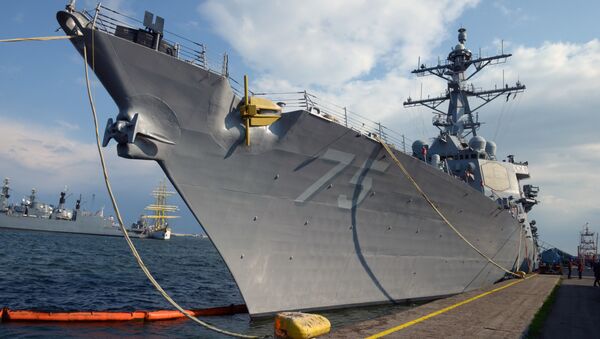 Russian armed forces began tracking the movements of the USS Donald Cook soon after the ship entered the region, with one of the Russia’s Black Sea Fleet frigates shadowing the missile destroyer.

Images of the USS Donald Cook, a US missile destroyer recently deployed to the Black Sea, have appeared on social media shortly after the ship entered the region.

The photos show the destroyer as it passed through the Bosporus on 19 January and set sail northwards.

#USSDonaldCook passed through Istanbul on 19th January 2019 northbound. This is the 1. deployment of this destroyer and 2. deployment of a US Navy warship to the Black Sea. To track movements of foreign warships through Bosphorus click here: https://t.co/MYUQ7ILfpJ pic.twitter.com/TEVqQLBlco

​The movements of the US vessel are being closely followed by the Russian Black Sea Fleet, which has already sent one of its frigates, the Pytlivy, to shadow the foreign ship, while the Russian military also employs its electronic surveillance capabilities to keep tabs on the USS Donald Cook.

The United States has steadily increased its presence in the Black Sea region over the past year, frequently deploying warships to the area on various missions.