Sputnik Stringer in Hospital After Being Injured in Athens Protests 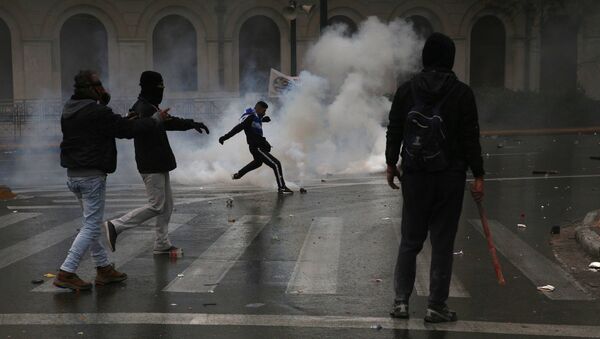 Some 60,000 people took to the streets of the Greek capital on Sunday to protest the Macedonian parliament's decision to ratify a controversial constitutional amendment to rename the former Yugoslav republic.

Sputnik stringer Kostis Dadamis has been taken to hospital after receiving a head injury while covering the rally against the Prespa Agreement, the June 2018 treaty between Greece and the Former Yugoslav Republic of Macedonia which agreed to rename the latter country as the 'Republic of North Macedonia'.

Dadamis suffered a blow to the head, and had his camera equipment stolen, Sputnik Greece reported. His attackers' identities remain unknown. 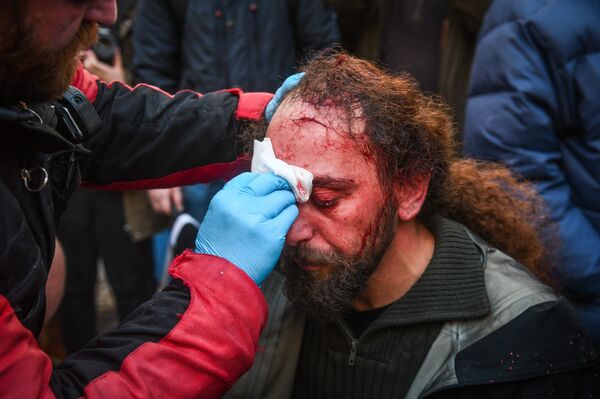 Preliminary reports suggest Dadamis was approached by two or three individuals who demanded that he give them his camera. The journalist refused, prompting the assailants to chase after him and other photographers who stepped in to help. Eventually, Dadamis and the other journalists were surrounded by a mob and attacked.

Media have published images of Dadamis from the scene shortly after he received his injuries. 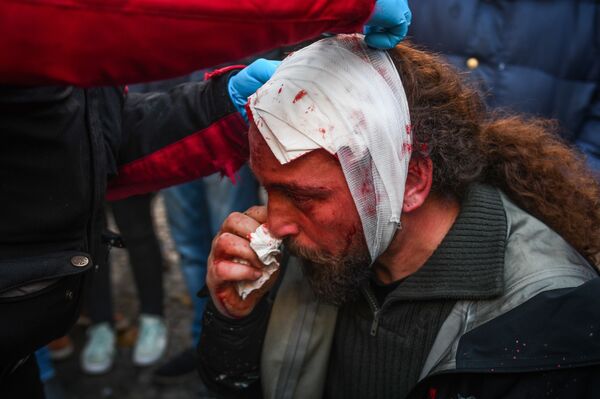 ​At least one other photo journalist has been reported injured in the protests, which turned violent as demonstrators clashed with riot police near Greece's parliament.

Dadamis is in hospital, getting an x-ray on his head to determine the seriousness of his injury. He has been in contact with colleagues, as well as his brother.

Riot police equipped with shields and truncheons launched volleys of tear gas into the crowd as dozens of violent protestors threw rocks, firebombs, paint, and other objects at police and the parliament building.

The Prespa Agreement, which will allow Macedonia to join the European Union and NATO as Greece removes its veto on membership in the organisations, has faced criticism in both Greece and Macedonia. Some Greeks believe that the name 'Macedonian' should be reserved exclusively for those who live in the Greek region of Macedonia, referring to use of the word going back to the Ancient Greek period. Some in Skopje, meanwhile, see the name change as a blow to the country's national identity.

Athens Slams Moscow Over Comments on Macedonia Name Change Deal
Greece and Macedonia have been embroiled in the naming dispute since the collapse of Yugoslavia. Last year, Macedonia held a referendum on the issue, with the country's electoral commission reporting that 91.46 percent of voters had chosen to rename the country, while 5.65 percent opposed. However, most opponents of the name change boycotted the referendum, with turnout amounting to just 36.91 percent of total eligable voters, meaning it failed to secure the necessary 50 percent turnout required to be considered valid.
Last week, the Greek foreign ministry asked Moscow to "refrain from making" statements which "interfere in the internal affairs of Greece" after the Russian foreign ministry called the name change deal an 'artificial' process imposed from the outside in order to force Skopje to join the NATO bloc. In Russia's view, the name change violated Macedonian law and ignored the will of the country's president and that of the majority of the population.
Newsfeed
0
Access to the chat has been blocked for violating the rules . You will be able to participate again through:∞. If you do not agree with the blocking, please use the feedback form
The discussion is closed. You can participate in the discussion within 24 hours after the publication of the article.
To participate in the discussion
log in or register
loader
Chats
Заголовок открываемого материала