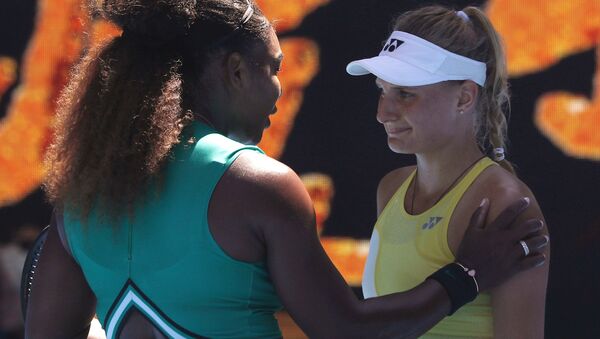 Williams demolished 18-year-old rival Yastremska in 67 minutes, reducing her to tears. She rushed to give her an uplifting message post-match, but critics claimed that Williams tends to show less class when she is losing.

Serena Williams stormed into the fourth round of the Australian Open on Saturday after thumping Ukraine's Dayana Yastremska 6-2, 6-1 in two straight sets.

The American tennis legend, 37, who holds 23 Grand Slam titles, approached her 18-year-old rival after the match to cheer her up.

She later told reporters that Yastremska's tears are evidence of great sportsmanship.

"As she was walking towards the net, I could tell she was quite upset," Williams said. "I kind of liked that, you know. It shows she wasn't just there to play a good match, she was there to win. She wanted to win. That really broke my heart."

😲 @serenawilliams is an amazing WOMAN (not because she’s a great athlete but as a fantastic human being). She’s truly an inspirational woman.

…some critics pointed out that she had failed to show similar class when she was going through tough times.

Specifically, they rescinded her temper tantrum after her 6-2, 6-4 loss to 20-year-old rising Japanese star Naomi Osaka in the US Open final in September. Back then, Serena called the chair umpire a "thief" and accused him of sexism for giving her three code-of-conduct violations.

Yeah, when she wins it’s all smiles, but when she loses it’s everyone else’s fault

too bad she couldnt say that when she lost against naomi

It’s easy to show class when you win. Where is that same class when she loses? 🤔