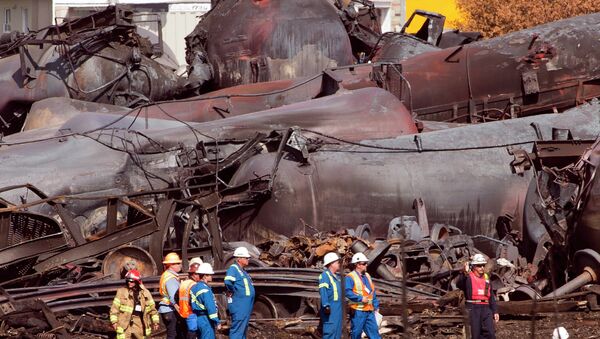 A minister for the Canadian province of Quebec demanded that US entertainment company Netflix take down footage of the 2013 Lac-Megantic railway incident, insisting that the movie Bird Box used the tragic images for “entertainment purposes.”

Nathalie Roy, minister of culture and communications for the Canadian province of Quebec, wrote a strongly-worded letter to Netflix demanding that the company take down all images and footage of the Lac-Megantic railway incident from its productions, including from the hit movie ‘Bird Box.'

Netflix used actual footage of the July 6, 2013, Lac-Megantic tragedy, in which the brakes of a train carrying hundreds of tons of crude oil failed after a locomotive fire; the runaway train then derailing in the middle of the town of Lac-Megantic and killing 47 people, destroying 30 buildings, 115 businesses and forcing thousands out of their homes, according to CTV News Montreal.

"These archives should never be intended for use other than for information or documentary purposes," she wrote. "Under no circumstances should we tolerate the use of human tragedies of any kind for entertainment. Both morally and ethically, it is simply inadmissible."

After pointing out that the town was still recovering from the 2013 tragedy, she attacked Reed Hastings, co-founder and CEO of Netflix.

"If it had touched one of your relatives, Mr. Hastings, how would you have reacted by learning that a multinational was using images reminiscent of heavy and dark memories and only for profit?" Roy asked in a letter. "We can only deplore such a lack of compassion, empathy and solidarity towards all those affected by this horrible tragedy," Roy's letter stated.

Earlier this week, the mayor of Lac-Megantic, Julie Morin, made a similar request and was reportedly told by a representative of Netflix that the firm would make sure the footage is not used in future productions, Global News reported.

Roy called on movie makers to set up a code of ethics as a means to avoid similar situations in the future, according to the report.

​After Roy tweeted her letter — written in French — to Netflix, users praised her efforts, while others criticized her choice of language as limiting.