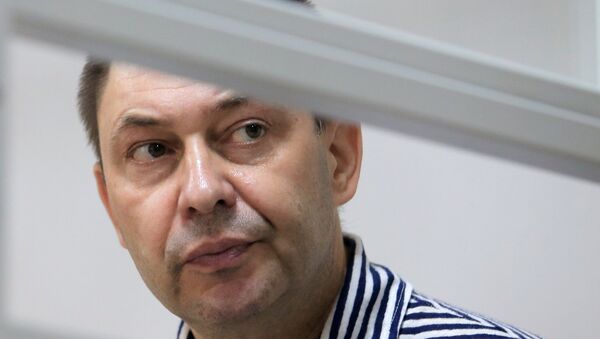 MOSCOW (Sputnik) - The defence team of RIA Novosti Ukraine portal head Kirill Vyshinsky has filed a challenge with a Ukrainian appeals court against a lower court’s ruling to extend his detention, a lawyer has told Sputnik.

"We have already mailed it. We expect it [to be heard] in early February," Andriy Domansky said on Sunday.

The attorney added he was going to file a complaint against two searches in his own house, which he called a "vendetta."

"I will challenge what they [Prosecutor General's Office] did. I will take action within the law. I can defend my rights… in European courts, if need be," Domansky said.

Ukrainian Prosecutors: Pretrial Investigation Against Journo Vyshinsky Completed
Vyshinsky was detained in Kiev last May on charges of high treason and supporting the bid for independence by two breakaway regions, which carry a maximum penalty of 15 years in jail. A court in the southern city of Kherson has upheld his detention until February 16.