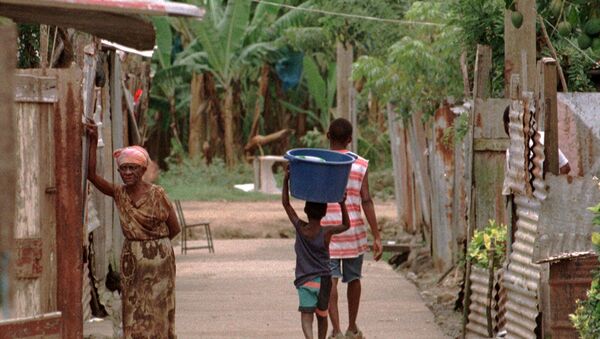 © AP Photo / Lynne Sladky
Subscribe
A senior Briton found dead in his home under mysterious circumstances shared his house with two young women and had an estranged wife who became pregnant by another man.

Robert "Bob" Hathaway, a 66-year old UK expat with a taste for exotic living, was found dead in his home on St Lucia, in the Windward Islands of the Caribbean Sea, The Sun reported Saturday.

The elderly Briton, known among the sailing community and hoteliers of the island sovereign nation, was discovered lying atop bloodied sheets, with his face covered by a pillow on January 13.

Selfie-Couple From India Who Died in Yosemite Park Were Drunk, Autopsy Reveals
Local police, who launched an investigation into the mysterious death, say they have no solid motive for the crime, but one possible lead may be Hathaway's relationship to women.

"His weakness was always women," stated estranged wife Marquena James. James discovered the death after an undisclosed person with access to police records provided her with a photo of the crime scene.

​"Bob was infatuated with young girls; he loved them. I think they brought him a lot of joy and comfort. It was just what he was into," said a policeman who claimed to be a close friend of the family.

The two became estranged after James became pregnant by another man. They parted on good terms, however, because their relationship was ‘open', and Hathaway knew that she sought children, something he "couldn't give" her.

Hathaway shared his house with two other young women whose ages are not reported, known locally as Kim and Liz. In a conversation posted on Facebook following his death, he referred to them as "a bisexual couple of girls… like two girlfriends."

Flying the SLU Flag in SVG

​The conversation revealed the rationale behind this arrangement.

"One young gf [girlfriend] living with me alone would be bored witless," Hathaway wrote, according to The Sun. "So this arrangement seems logical and two months in seems to work."

"It helps that they don't like wearing clothes," he quipped.

The Odd Couple: Japanese Woman Decides to Marry Stalker Who Stole Her Phone
According to The Times, Hathaway lived for nearly two decades on the island, running the Marigot Bay marina, and was heavily involved in the business of tourism.

The deceased was also involved in local politics, particularly in warning authorities against granting investment visas to wealthy foreigners, suggesting that the practice opened the door to the criminal laundering of money.

Services for the late islander were not announced, although it was expected that a private ceremony would be held. No other next of kin were mentioned.