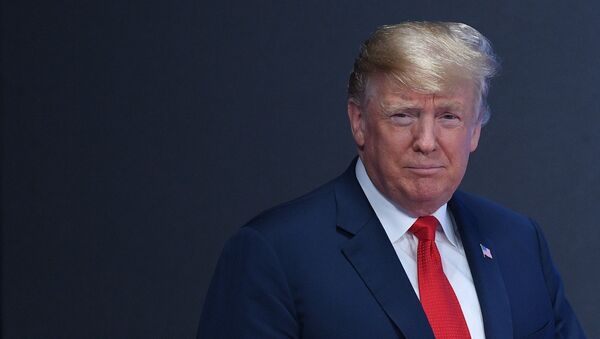 © Sputnik / Vladímir Astapkovich
/
Go to the mediabank
Subscribe
International
India
Africa
US President Donald Trump made a statement on Saturday in a bid to end the partial US government shutdown, proposing a 3-year legislative relief for the so-called Dreamer immigrants that could protect them from deportation. The US president also offered protections for immigrants who hold temporary protected status.

Ahead of Trump's major Saturday announcement on the nation's longest government shutdown, CNN has reported, citing sources, that the US president would allow Deferred Action for Childhood Arrivals (DACA) recipients – who came to the country as children — also known as "dreamers" — and Temporary Protected Status (TPS) visa holders to remain in the United States.

Describing the US immigration system on Saturday as "badly broken", Trump said: "I am here today to break the logjam and provide Congress with a path forward to end the government shutdown and solve the crisis along the southern border".

Shortly before Trump's statement, the top Democrat in the US House of Representatives, Nancy Pelosi, said in a statement that the president's offer was "unacceptable" because it did not "represent a good-faith effort to restore certainty to people's lives".

Trump: If We Win Daca Case, We’ll be Able to Ink Deal on ‘Dreamers’, Border Wall
Earlier on Saturday, Dick Durbin, the No. 2 Senate Democrat, said he could not support Trump's offer. "First, President Trump and Senate majority leader McConnell must open the government today", Durbin said in a statement, cited by Reuters.

"Second, I cannot support the proposed offer as reported and do not believe it can pass the Senate. Third, I am ready to sit down at any time after the government is opened and work to resolve all outstanding issues", Durbin said, quoted by Reuters.

In his Saturday speech, Trump also proposed increased funding for border security, stressing that he seeks a path to end the government shutdown stalemate. In particular, Trump proposed adding 2,750 more border agents and reiterated his request for some $5.7bln to build a much-promised barrier on the southern US border.

Trump Grounds All Congressional Air Travel on Gov't Planes Amid Shutdown Spat
Trump previously hinted that he would declare a national emergency in order to secure funds to build a wall along the border with Mexico, but followed up by stating that he would prefer to reach a deal with Congress.

The shutdown was caused by a standoff between Trump and the Democrats over the president's demand for funds to build a wall along the southern US border with Mexico. Trump is asking Congress to approve $5.7 billion to build the wall, but Democrats refuse to provide funds for the barrier.

The impasse has left the US federal government partially closed for a record 29 days.

READ MORE: ‘No Crisis On The Border': Trump's Argument For Border Wall is Baseless