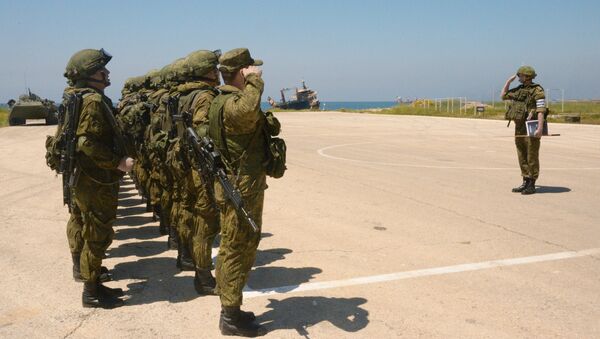 © Sputnik / Dmitriy Vinogradov
/
Go to the mediabank
Subscribe
International
India
Africa
Russian Foreign Minister Sergei Lavrov said that the US accused Russia of violating the Intermediate Nuclear Forces Treaty simply as a pretext to withdraw from the accord, while all attempts to preserve the INF agreement were rejected. Lavrov made the statements at a press conference after talks with German counterpart Heiko Maas in Moscow.

The US Under Secretary for Arms Control and International Security Andrea Thompson said that Washington will begin its withdrawal from the INF Treaty in February. Meanwhile, on Thursday, Donald Trump laid out plans for a new space-based missile defence strategy that aims to protect the US against existing threats, including North Korea and Iran, and to counter advanced weapons systems developed by Russia and China.

Sputnik has discussed the issue with Dr Dominick Jenkins, a philosopher, historian and author of the book "The Final Frontier: America, Science and Terror". He has also led campaigns against nuclear weapons and nuclear reprocessing.

Sputnik: What could be the consequences of US withdrawal from the INF Treaty?

Dominick Jenkins: The future is open. What we do know is that this treaty was deeply political. In Britain, a whole generation of activists focused on the deployment of American cruise missiles at Greenham Common and at Molesworth, and this for a whole generation was the issue.

So I think people should be careful about thinking that this will just go ahead without popular mobilisation because it really would be a sign that the nuclear arms race is coming back in a big way.

World
EU Diplomats Leaving Russian Official INF Briefing Refuse to Comment on It
Sputnik: Can this treaty be saved?

Dominick Jenkins: It is looking that the US administration is throwing away a real building block of the international regime and one has to be pessimistic, and people need to wake up and see what’s happening.

Sputnik: What will be the consequences if both sides pull out of the treaty? And why is the Trump administration so insistent on abandoning it?

Dominick Jenkins: Firstly, I'll talk on the second point first. The reality is that if we look at general military situation, the rhetoric is opposed to reality, because the United States currently spends in the order of $610 billion each year, NATO countries $900 billion each year on military, whereas Russia spends around $66 billion.

So we’re talking about a disparity in defense expenditure Russia versus the United States of a figure of nine times and versus NATO, a figure around thirteen times. So there’s no possibility whatever that we're talking about a Russian threat to Europe in real terms.

So once we have this in mind, it’s quite evident that this symbolic politics of a very nasty kind and that I see concerns coming out of the anti-nuclear movement, people need to reject this creation of false fears.

New Military Spending Bill Bolsters US Militarism, Destroys Economy
Sputnik: How high are the chances that we may see another arms race between Washington and Moscow?

Dominick Jenkins: Well, the first thing to be clear is that the end of the Cold War saw a massive reduction in the shared number of nuclear weapons, but what also happened was the re-engineering of nuclear weapons, and this is something the public is not aware of.

This led by the United Kingdom but what I would focus on that is out of the public understanding is that in the United States we have three giant nuclear weapons laboratories.

One located at Los Alamos, another in Sandia and the third at Lawrence Livermore, Berkley. These nuclear weapons laboratories have not accepted that there has ever been an end to the nuclear arms race, despite the end of nuclear testing, [they] have attempted to produce a re-engineered nuclear weapon.

Just to give you a picture. These laboratories are the size of small cities, so whenever we think there has been an end for those people there has never been an end. Similarly in Britain and in France. It’s kind of odd to talk about a restart, rather it would be more going back to instead of these laboratories in a sense being out of view them becoming much more central political than before.

Sputnik: What’s your assessment of the US plans for a more aggressive space-based missile defence system?

Dominick Jenkins: I’m very much a historian as well. We must understand in historic terms what has happened. For a brief period in the 19th century the European powers managed to extend their power beyond the coast of Africa and Asia and the Americas right into the centre, this is very […] period in history and was the result of a period of technological dominance that will not return, it was extraordinary.

Americans’ Faith in US Military Far Exceeds Faith in US Economy
And there’s a vision in the United States that it should return. What we will have is a historic mix-mash between what is actually possible and what the United States wishes were possible, of course, the US military, diplomatic and political elite.

And that’s not a good thing.

It should also be put into context that American power is declining. Beyond treaties we have to appreciate that there are rising countries, Brazil for example, and that power will flow to them. The future is open, they must recognise that there are more players than America, China and Russia.

Sputnik: Do you think Beijing and Moscow will follows suit and create their own space-based missile defence systems?

Why would China want to do that? It’s not really possible to use nuclear weapons to exert substantial diplomatic leverage, indeed, it really has the opposite effect. I think maybe we should be more confident in the possibilities of enlightenment policy that won't happen if we don’t ourselves add to that.

Views and opinions expressed in this article are those of Dr Dominick Jenkins and do not necessarily reflect those of Sputnik.