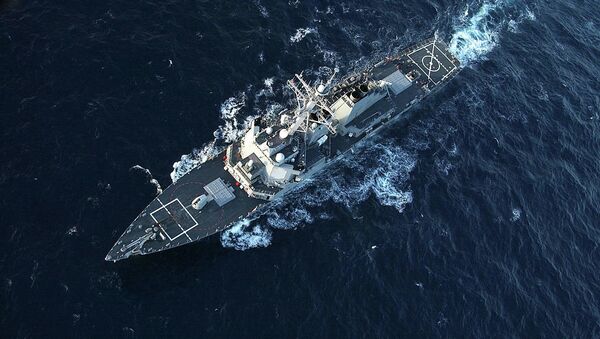 The US missile destroyer is being shadowed by Russia’s Pytlivy frigate and tracked using electronic and technical surveillance capabilities, the center added.

The United States’ 6th Fleet commander, Vice Adm. Lisa Franchetti, noted that Russian warships have been "professional " in their interactions with US Navy vessels over the past year during encounters in the Baltic, Black and Mediterranean Seas.

"I’ve been here about ten months now, and we do get a chance to see them operate in the Baltic, the Mediterranean, the Black Sea. By and large, all those interactions have been professional," Franchetti said in an interview with Defense News published Monday.

Ukrainian Navy to Engage Intl Observers for Next Kerch Strait Passage - Official
"We operate in international waters. The Russians are operating in international waters. My expectation of my forces and the Russian forces is that they are going to be safe and professional," Franchetti said. All navies have a right and responsibility to act professionally at sea, Franchetti added.

The United States — a NATO founding member — has steadily increased its presence in the Black Sea region over the past year, with military exercises for the bloc held in Black Sea waters and US warships frequently entering the area. Russian authorities have repeatedly condemned NATO actions as provocative, adding that they  threaten an increased military risk in the region.