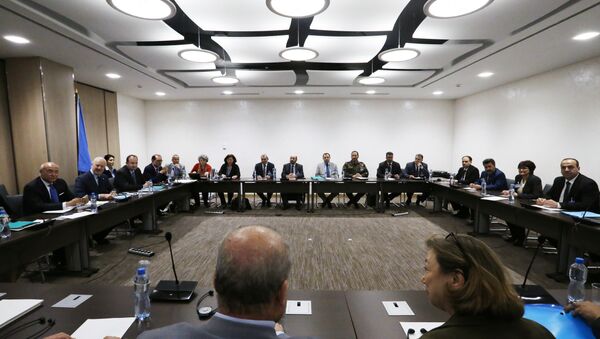 ANTAKYA (Turkey) (Sputnik) – New UN Special Envoy for Syria Geir Pedersen discussed with the opposition Syrian Negotiation Committee (SNC) the launch of the constitutional committee, Ruba Khabush, the SNC member, told Sputnik, adding that the opposition group emphasized the importance of the Syrian settlement talks in Geneva to the diplomat.

"At the meeting with Pedersen, we emphasized the importance of the constitutional committee and the need to create a mechanism for its launch in order for it to work under the UN auspices which has been agreed upon. We reaffirmed that Geneva must remain the negotiating platform. The move in this direction might begin in the coming days, because Pedersen said he planned to visit Moscow and Ankara — the capitals of the countries having much influence on the Syrian agenda", the SNC member said.

Khabush also suggested that the UN envoy would discuss the launch of the constitutional committee and the demilitarized zone in Idlib, agreed upon by Russia and Turkey, during his visit to Ankara and Moscow.

READ MORE: Trump Did Not Consult Allies Before Deciding to Withdraw From Syria — McGurk

The opposition figure said Pedersen had told SNC that after his trip, he would return to the Middle East where he would again hold meetings with the Syrian government and the opposition group.

"At the meeting between Pedersen and the SNC, it has been agreed that it is necessary to implement the UNSC Resolution 2254 [on the ceasefire and political settlement in Syria]. Moreover, the SNC covered a lot of issues, including the importance of the political settlement of the Syrian conflict and the issue of the ordeals refugees go through in camps", Khabush pointed out, noting the envoy's positive attitude to various topics.

Pedersen, in his turn, wrote on Twitter that, just like during his talks with the Syrian government, he emphasized to the SNC that "UNSC resolution 2254 guides political process respecting Syria's sovereignty & territorial integrity and foresees Syrian-led & —owned political solution facilitated by UN".

Sochi Talks Roundup: Russia, Iran, Turkey Reach Important Breakthroughs on Syria
The efforts to settle the Syrian conflict have been made as part of the Geneva talks on the political process and the Astana settlement talks on the reconciliation of the Syrian sides.

Earlier this week, Pedesen visited Damascus for talks with Syrian Foreign Minister Walid Muallem, which the UN envoy called constructive. After the meeting, he went to Riyadh for talks with the SNC there.

At their meeting with former Envoy for Syria Staffan de Mistura in Geneva in December, the guarantor states of the Syrian ceasefire — Iran, Russia and Turkey — agreed to make an effort to help convene the first session of the Syrian constitutional committee in Geneva early in 2019.

Daesh Not Defeated, US Commanders Reportedly Warned Trump Ahead of Syria Pullout
The agreement to set up a committee tasked with writing a new constitution was reached at the Syrian National Dialogue Congress in the Russian resort city of Sochi in late January 2018. The involved parties, however, have yet failed to agree on the composition of the committee.

The body is expected to include the representatives of the Syrian government, opposition and the civil society.

Russian Deputy Foreign Minister Sergey Ryabkov said earlier in January that Moscow has registered attempts by the so-called small group on Syria, led by the United States, to impede the creation of the Syrian constitutional committee. The small group on Syria brings together Egypt, France, Germany, Jordan, Saudi Arabia, the United Kingdom, and United States. Since the beginning of last year, members of the group have been regularly meeting in a bid to find a solution to the Syrian conflict.

READ MORE: US Teacher in Daesh Ranks Sees no Difference Between Executions in Syria, Texas

Resolution 2254 on Syrian settlement was unanimously adopted in December 2015. The Security Council endorsed a timetable and a road map for the UN-facilitated peace talks between the Syrian government and opposition. The document highlighted the importance of the ceasefire and a parallel political process, which should include free and fair elections, and a new constitution.