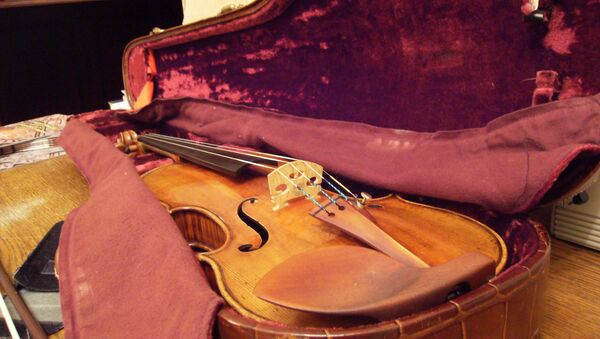 © Flickr / Rick Shinozaki
Subscribe
International
India
Africa
In the birthplace of renowned 17th century instrument master craftsman Antonio Stradivari, a museum and a group of sound engineers are busy with a unique project requiring almost total silence. But it isn't as easy as one might imagine, practically requiring a whole town to hold its breath.

The mayor of the Italian town of Cremona, the home of some of the world's most sought-after instruments, and former workshop of Stradivari, has made a seemingly odd request of residents: that they keep quiet.

All through this month, an elite group of sound engineers is working to create what's called the "Stradivarius Sound Bank," an impressive and hopefully flawless digital recording featuring the sounds of original Stradivarius violins. Using 32 hypersensitive microphones, the engineers are recording two violins as they are played at the auditorium of the Museo del Violino. The intense 'jam session' is going on for eight hours a day, six days a week, with four musicions playing the violins using a variety of techniques and running through literally hundreds of scales and chords.

The grand scale of the project posed the problem of extraneous sounds. "The streets around the auditorium are all made of cobblestone, an auditory nightmare," Leonardo Tedeschi, a sound engineer and former DJ who came up with the idea to create the digital sound archive, told The New York Times. Everything from car engines to a woman walking in heels would produce vibrations which could ruin the recording, he explained.

This is What a 3D-Printed Violin Sounds Like
Coming in to assist, Cremona's mayor, Gianluca Galimberti, who also happens to be the president of the Stradivari Foundation, ordered streets around the museum to be closed for five weeks, deploying police to cordon off traffic, and called on city residents to stay as silent as possible while recording is in progress.

Fausto Cacciatori, curator of the Museo del Violino, is doing his part to assist in the important project, and explained that the existing Stradivarius instruments may have as little as a few more decades of life in them before their sound is silenced forever. "It's part of their life cycle," Cacciatori explained, speaking to the Times. "We preserve and restore them, but after they reach a certain age, they become too fragile to be played and they 'go to sleep', so to speak," he added.

Residents have done their best to keep noise at a minimum, but things haven't always gone off without a hitch. During one recording session, Florencia Rastelli, a barista at the town's Cremona Chiave di Bacco café, accidentally knocked over and shattered a glass. "I was like: Of all days, this one," she recalled. "Even a police officer popped in and asked me to keep it down. I was so embarrassed."