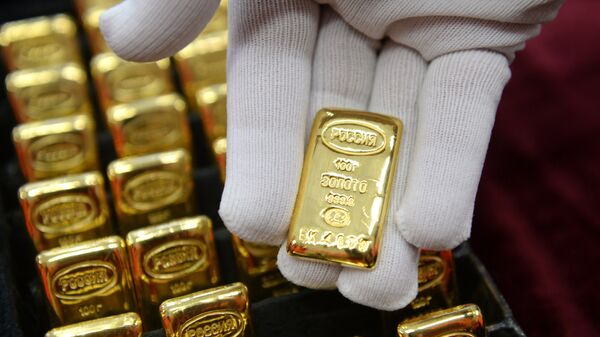 © Sputnik / Pavel Lisitsyn
/
Go to the mediabank
Subscribe
International
India
Africa
This week, the Russian Central Bank reported that it had added to its gold reserves again in 2018, with the sovereign stockpile jumping by nearly 275 tonnes to 2,112 tonnes total.

The stockpile, valued at close to $87 billion at today's exchange rate and comprising 18.6 percent of Russia's total reserves of $468.5 billion, has allowed Russia to enter the top five countries in terms of gold reserves, surpassing China.

Russian gold reserves have been climbing steadily for over a decade, growing from just over 500 tonnes in 2009 to the present figure, a record for modern Russia, and moving ever-closer to the 20th century Soviet record of 2,800 tonnes on the eve of the Second World War.

Russia
Russia Enters Top 5 on National Gold Reserves List Beating China - Central Bank
Russia's status as a major gold-producing country has enabled it to top up reserves largely from gold mined in the country. Although the Russian Ministry of Finance has not yet published the complete 2018 figures on gold production for 2018, January-October 2018 figures reflect a gold output of 264.99 tonnes in the first three quarters of the year, up from 261.17 tonnes produced during the same period in 2017.

According to financial analysts speaking to the Russian online news portal Gazeta.ru, the growing share of gold in reserves is part of the strategy to reduce the country's dependence on the US dollar, a subject which has become particularly relevant in light of the growing threat of new US sanctions against Moscow targeting dollar settlements by Russian banks.

As Sputnik indicated last week, the gold buy-up has come in conjunction with the Russian Central Bank's dumping of some 24.4 percent of its dollar-denominated reserves, with euro and yuan-denominated assets, plus gold, serving to make up for it. As of October 2018, Russian investment in US Treasury bills, once a staple of Russia's reserve portfolio, dropped to just $14.8 billion, down from a whopping $176.3 billion in 2010, when the figure hit its peak. As of Q2 2018, US dollar-denominated assets in Russia's reserves sat at 21.9 percent of the total, down from 46.3 percent a year earlier.

According to Alor Broker analyst Alexei Antonov, although the Russian Central Bank may continue to purchase some US dollars, T-bills and other obligations in the future, the overall strategy on US debt seems unlikely to change.

Four Good Reasons Why Russia Is Purging the Dollar From Its Reserves
For his part, BKS Broker senior analyst Sergei Suverov noted that the use of the euro is an effective alternative to the greenback in international trade. "But if there's a need to get some insurance in the event of a crisis, the Swiss franc and the Japanese yen may be of interest," he said.

Last week, Russian Prime Minister Dmitri Medvedev indicated that it was the US's "aggressive" and even "stupid" economic policy, and not some political vendetta, which prompted Moscow to change its trade and investment strategies.

"As is known, we are also widening the use of rubles and other currencies in foreign trade transactions; we have drastically cut down other investments in US Treasury securities. Incidentally, a recent batch of Russian Eurobonds has been issued in euros – all of this is a result of the aggressive, and frankly speaking, often stupid economic policies pursued by the United States," Medvedev said, speaking at the Gaidar Economic Forum in Moscow.

Russia Buys Yuan Reserves: Still Long Way to Go on Ditching Dollar - Pundits
Medvedev predicted that the tendency toward rejecting the dollar as a global reserve currency will only grow with time, not only in Russia, but internationally. "The country whose currency is a key reserve currency is itself destroying its credibility," he said.

The Russian Central Bank began diversifying its international reserves in April, in response to fresh US sanctions against Moscow. Late last year, addressing the alleged 'weaponisation' of the dollar, Russian President Vladimir Putin quipped that the White House was "shooting itself not in the foot, but a bit higher".

"We do not have the goal to move away from the dollar, we are forced to do this. Let me assure you, we will do this…We are not leaving the dollar, the dollar is leaving us," Putin said, following the publication of a de-dollarisation plan announced by the CEO of VTB, Russia's second-largest bank.