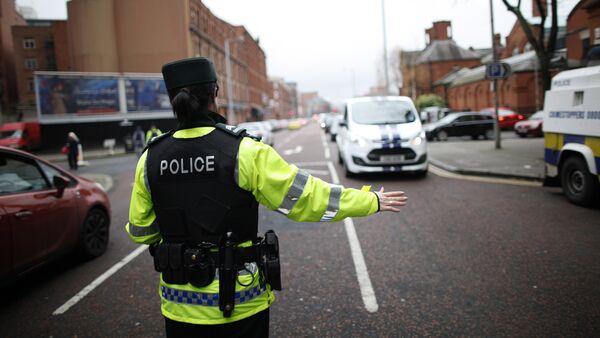 © AP Photo / Peter Morrison
Subscribe
International
India
Africa
Currently, the police are working at the site of the emergency in Northern Ireland's city of Derry. No further details of the incident were reported, the Belfast Live website said Saturday.

According to the publication, on Saturday evening, eyewitnesses heard a "loud explosion" at Derry's Bishop Street. The police published a photo showing a burning car. The police also noted that there has been no information about the victims of the incident.

Car bomb outside Derry Court House on Bishop Street. Why is Westminster ignoring the effects of Brexit on the Good Friday Agreement? pic.twitter.com/uJ7VZN1otF

Police officers have evacuated people from the street, since there is another car in the area that seems suspicious to the police. Police of Northern Ireland reported on Twitter that an "initial investigations" was being conducted in connection with the incident.

If you weren't reared in Derry/Londonderry, the Courthouse target is 100 meters from The Fountain estate, the last place Protestants/Unionists/Loyalists live on the West Bank of the City — petrol-bombed last summer by sectarian dissident-backed knuckleheads. pic.twitter.com/2KneA8lX9a

Brexit Shambles: No 'Clear Direction' for UK Government - UKIP
Elisha McCallion, a parliamentarian from Sinn Fein party, confirmed Saturday that no one was injured in the incident.

"Thankfully no one appears to have been injured in this incident. Derry is a city moving forward and no one wants this type of incident. It is not representative of the city," the parliamentarian said in a statement.

In the 1970s and 1990s, clashes between local Catholics and Protestants occurred in Northern Ireland, accompanied by terrorist attacks. The attacks also occurred in the 2010s. For instance, on 22 February 2017, the New IRA (Irish Republican Army) terrorist group attempted to blow up a police car in Derry.