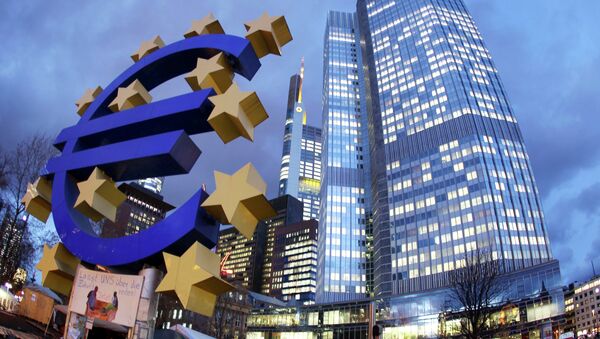 © AP Photo / Michael Probst
Subscribe
The European Central Bank (ECB) is facing personnel turmoil, audit requests from the EU, as well as a possible recession in the Eurozone; experts say a combination of these challenges could hurt the ECB's credibility as it braces for a major policy adjustment this year.

Kristian Rouz — The European Central Bank is facing growing problems as it prepares to lift its base interest rate above zero after nearly a decade of unprecedented monetary stimulus. Additionally, ECB President Mario Draghi is under pressure after EU auditors requested access to central bank documents related to its supervision of commercial banks in the Eurozone.

The ECB is preparing to gradually wrap-up its unconventional policies of zero-to-negative interest rates (ZIRP and NIRP), but central bankers are facing new challenges. ECB supervisory Vice Chair Sabine Lautenschlaeger is set to soon leave her position as her non-renewable five-year term expires, and Draghi has until 11 February to find a replacement.

European Central Bank Urges Eurozone Reform to Boost GDP Growth
However, the supervisory branch of the ECB is now facing increasingly high levels of EU scrutiny, as the European Court of Auditors expressed concern that the central bank might have not performed its duties "properly" over the past few years — including during Italy's banking turmoil in early 2017.

The auditors called on the European Parliament and European Council to uphold their request for the ECB to disclose information about banking supervision in line with the Eurozone's Single Supervisory Mechanism, which was implemented in late 2014.

"It is essential that we have full powers to audit the ECB's supervisory activities. This is particularly important given the high risks to public funds from banking failures and the complexity of the new supervisory mechanism," the European Court of Auditors said in a letter.

Meanwhile, the ECB is currently struggling amid several issues related to banking supervision. In the wake of Lautenschlaeger's departure, a new head of supervision has only started the job. Meanwhile, if the UK goes ahead with Brexit, several large British banks will fall outside of the ECB's supervisory framework.

In this light, the ECB is seriously debating extending Lautenschlaeger's term, as her experience is deemed necessary to navigate the central bank through the contemporary economic, political, legal, and — seemingly — personnel challenges.

Officials say the only person who could replace Lautenschlaeger is Vice President Luis De Guindos, who, some believe, might be lacking experience, as he has only been with the ECB for roughly a year.

However, the ECB is also facing credibility challenges, as many economists say the Eurozone could be on the brink of a recession due to the ongoing Brexit turmoil and disruptions in international trade.

A recession after roughly a decade of ultra-accommodative monetary policies would deal a major blow to the credibility of any central bank for that matter, but in case of the ECB, a scent of Euroscepticism adds to the debate.

If the ECB were to change its internal rules to elongate the term for one of its top officials, some would be inclined to suspect the central bank of incompetence.

"The ECB calls on banks and countries to follow the rules, so it would be surprising if they bent their own," Professor Mascia Bedendo of the Audencia Business School in Nantes, France said.

"I wouldn't expect Draghi to change them to extend Lautenschlaeger's term, but exceptional times can call for exceptional decisions."

For its part, the European Court of Auditors said it has faced issues trying to assess the ECB's work in the past. In 2016, the auditors said it was hard for them to obtain relevant documentation from the ECB, despite the central bank being subject to EU audits by law.

The European Parliament has criticised the ECB over the matter as well, saying withholding documents was "unacceptable from an accountability point of view".

European Central Bank Starts Preparations for Stimulus Withdrawal
For its part, the ECB has argued in the past that it has no authority to disclose certain information — even for audit purposes — due to bank confidentiality rules.

However, auditors said the lack of transparency on the part of the ECB could endanger the stability and sustainability of the European financial system, though some argue that the mounting regulatory and oversight tensions aren't encouraging either.

"Risks materialising in this area can endanger the stability of financial systems and the single market," the European Court of Auditors said.

Experts also point to yet another problem the ECB is facing, adding to the concern of how the central bank will navigate the Eurozone through the muddy waters of Brexit, global trade woes, and internal financial woes: President Draghi's term is expiring this October.