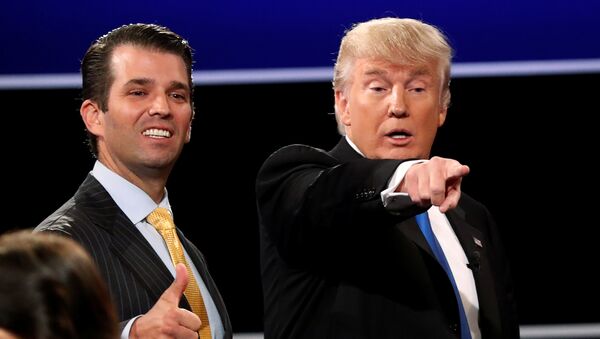 © REUTERS / Mike Segar/File Photo
Subscribe
BuzzFeed's damning claim was seen by the mainstream media as a huge development in the alleged Russian collusion story, but it was labelled "not accurate" by Robert Mueller's office.

Donald Trump Jr. turned to emojis to react after Special Counsel Mueller disputed a recent BuzzFeed bombshell that Michael Cohen had allegedly lied to Congress at the behest of his father, President Trump.

His tweet came in response to a rare statement from Mueller's office, which said: "BuzzFeed's description of specific statements to the special counsel's office, and characterisation of documents and testimony obtained by this office, regarding Michael Cohen's congressional testimony are not accurate."

This comment did not specify which parts of the report were inaccurate. However, according to The Washington Post, it was intended "to make clear that none of those statements in the story are accurate", which would effectively mean that the whole story is a hoax.

CNN's Jeffrey Toobin said of the BuzzFeed controversy that it would have broader implications for the mainstream media: "People are going to take from this story is that the news media are a bunch of leftist liars who are dying to get the president, and they're willing to lie to do it. I just think this is a bad day for us."

Remember it was Buzzfeed that released the totally discredited “Dossier,” paid for by Crooked Hillary Clinton and the Democrats (as opposition research), on which the entire Russian probe is based! A very sad day for journalism, but a great day for our Country!

A host of commenters could not resist branding the controversial report as "fake news".

BOTTOM LINE OF WHAT HAPPENED:

Buzzfeed knew it published a lie. Rest of the media knew it was a lie, spread it anyway. The story was BS. They knew it. We all did.

BUT they figured there was no way they could be caught.

Because no one dreamed Mueller would fact check them.

The Buzzfeed bombshell bombed. It blew up in their face and the rest of the fake news are casualties too.

The reporters never saw the evidence. They went off of a source who said it was “credible”. This isn’t journalism.

Congratulations, Buzzfeed and CNN are head to head on the Fake News award. https://t.co/589cjvvlST

BuzzFeed dropped a major bombshell on Friday, claiming that Trump had personally instructed his long-time fixer Michael Cohen to lie to US Congress about negotiations to build a real estate project in Moscow known as the Trump Tower — something the president vehemently denies. As per the story, Trump also told Cohen to plan a trip to Russia during the presidential campaign so that he could meet with President Vladimir Putin.

The report cited two unnamed law enforcement officials, but one of the authors, Anthony Cormier, confessed that he had not seen the evidence personally, while claiming that his source was "rock solid". BuzzFeed has not published a retraction so far, and stood by its article, saying that it was "continuing to report and determine what the special counsel is disputing".