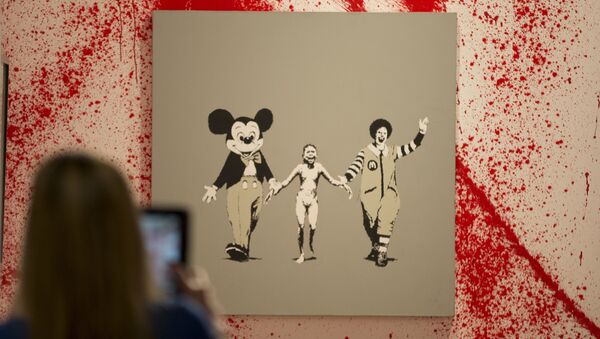 © AP Photo / Alastair Grant
Subscribe
International
India
Africa
A mysterious graffiti in Tokyo may have been identified, purported to have been painted by the notorious - and mysterious - artist Banksy, the Sun reported. All the time, the graffiti was hiding in the plain sight.

It is unclear when the graffiti appeared: some say it could have been painted last year, while others managed to spot the artwork on Google Street View dating to 2009. The authorship of the picture remains open for debate.

An image of a rat holding an umbrella, about the size of an A4-size sheet of paper, was found painted on a flood-proofing door near the Hinode station on the waterfront in Tokyo.

It is not clear when the graffiti was painted. According to The Sun, netizens began tweeting the image last year. Another report by ABC News, however, points out that the image can be seen on Google Maps street view dated 2009, indicating that the graffiti could have gone unnoticed for a decade.

​"Graffiti on walls are usually erased," Koji Sugiyama, a Tokyo Metropolitan government official said in an interview for CNN. "But [the rat] didn't stand out, so it was left there."

'Drunk Halfwit' Attacks Banksy’s New Christmas 'Greetings' Mural - Reports
It was not until December 2018 that the graffiti caught the attention of officials, who recognized its possible cultural significance after the locals suggested that it may be a Banksy.

The flooding-proof door was removed on January 16 and put into storage for safe keeping, ABC reported.

Yuriko Koike, the Governor of Tokyo, tweeted a photo of the artwork, speculating whether the image may be a "gift" from the street artist.

Tokyo Governor Yuriko Koike poses next to graffiti of a small rat that metropolitan officials think might have been left by the mysterious street artist Banksy. Japanese officials have a low opinion of street art, but that changes when global prestige is involved. (MP) #Banksy pic.twitter.com/Yz07wOUwzw

Prof: Banksy Reaches People with Anti-Establishment Messages in a Brilliant Way
​However, officials will have to rely on art expertise to define whether the work is indeed Banksy, since asking the elusive artist is apparently impossible.

Banksy stole world headlines last year when one of his works sold at auction for $1.4 million immediately shredded itself by means of a secret mechanism built into its frame — at the moment the gavel went down to signify the winning bid.

The painting's price has increased since the well-documented shredding. Many artists attempted to repeat the stunt, only damaging their works, according to The Sun.

Banksy's most recognized graffiti, dated 2002, depicts a little girl stretching her hand to a heart-shaped balloon being carried away by the wind. The notorious artist — who refuses to be identified — used a variant of this picture in 2014 as a part of campaign in support of Syrian refugees.