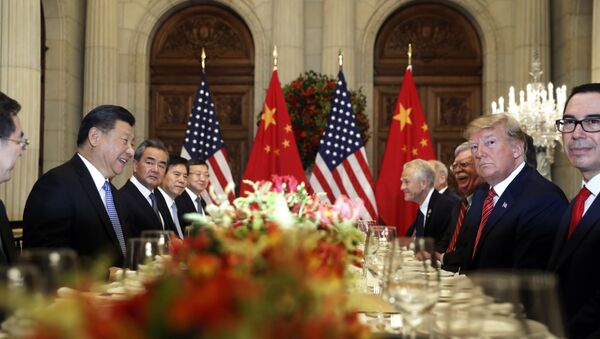 © AP Photo / Pablo Martinez Monsivais
Subscribe
International
India
Africa
On Monday, major stocks in Asian Pacific nations, as well as US corporations, tumbled amid reports of a decline in Chinese exports. However, the Asian Pacific markets have mostly traded higher despite concerns over an economic slowdown in China.

Sputnik has discussed the issue with Henry Gao, an associate professor of law at the Singapore Management University School of Law.

Sputnik: Asian markets have recovered slightly despite the initial fluctuations due to the announcement of a slowdown in Chinese exports. How soon will the markets stabilize?

'Markets are Not Taking US-China Trade War as Very Serious Matter' - Prof
Henry Gao: I think it really depends on a lot of since, I mean it depends on whether or not the US and China can reach a deal. I would say even if it stabilises, this just for the short-term, in the long-term, there is still a lot of volatility ahead.

Sputnik: How big is the impact of China’s exports slowdown and who is most affected by it?

Henry Gao: China’s exports slowdown is really major, I think if you compare it with the Chinese growth since they just joined the WTO pact in 2001, you can see that the impact is major and everyone will be affected by it.

But most of the impacts I think will be felt by the countries which rely on China as a major export market in exporting natural resources, you know, the countries like Australia and also a few Latin American countries, other Asian, countries which are feeding into the Chinese manufacturing. I think they will see the most impact.

Sputnik: Analysts raise fears of a sharper slowdown in global growth. How realistic is this, professor?

Henry Gao: I think, this is a very likely scenario because of many different factors. You know, the slowdown in China and also the US-China trade war.

EU-Italy Budget Standoff to Weigh on Eurozone Economic Growth
Elsewhere in Europe, you know, the instabilities in some countries in Europe, like in France. So, we are likely to see a slowdown in the near future this [year].

Sputnik: What markets will be most affected by the slump?

Henry Gao: That would be those markets which rely heavily on export, on international trade.

And also those countries with relatively modest domestic consumption rate, so they will not be able to generate enough domestic demand in order to help with economic growth. So, those two types of countries would be most affected.

Sputnik: Some analysts remain optimistic about the US-China standoff, believing that the two nations will be able to overcome their differences. How likely is that?

Expansion of US Sanctions Unlikely to Impact Russia's Sovereign Rating - Moody's
Henry Gao: You really have to look at it issue by issue. I mean there are some issues that I think it is very likely that the two sides can reach some sort of agreement that like, for example, the issue regarding force technology transfer and also intellectual propriety rights protection, because these are areas which China has been trying to adopt a new policy on its own, partly in response to the US demands.

But then there are some other issues which are harder to reach an agreement.

For example, if you ask China to give up entirely its state-owned enterprises, I think that would be very hard for China. In the short-term, we might see some agreements reached on specific issues, but in the long-term, I would say the US-China rivalry is still there and you would still expect frictions between the two countries from time to time.

Views and opinions expressed in this article are those of Henry Gao and do not necessarily reflect those of Sputnik.