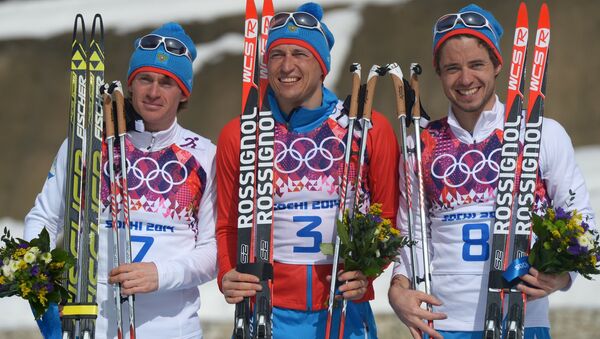 Legkov, 34, was fully cleared of all doping allegations at the Sochi Games, where he took gold in the 50 km cross country event and silver in the relay, after the Federal Supreme Court of Switzerland struck down an appeal by the International Olympic Committee (IOC) against the February 2018 ruling by the Court of Arbitration for Sport (CAS), which ruled to overturn his suspension from the Olympics.

Legkov's attorney, Christof Wieschemann, said his office was "delighted that the proceedings against our client…which lasted more than two years, have been successfully concluded."

"Both the athlete and we had to accept many setbacks. But the result is correct," Wieschemann said in a written statement to Sputnik, adding that the trial lasted some 60 hours and heard over 20 witnesses and experts.

World
Russian Olympic Committee ‘Has Served Its Sanction’ – IOC President
WADA informant Grigory Rodchenkov, a former employee at a Russian anti-doping lab, accused Russia of engaging in a state-sponsored doping program. His testimony to Canadian sports lawyer Richard McLaren about alleged doping at the 2014 Sochi Games led the IOC to strip Russia of its first place finish at the Games, saw the mass ban of Russian athletes from the 2018 Games in South Korea, and forced the country's remaining athletes to compete under the neutral Olympic flag.

On February 1, 2018, shortly before the 2018 Winter Olympics began, the CAS acquitted Legkov and dozens of other Russian athletes, but to no avail. The athletes remained disinvited to PyeongChang and could not compete, with the IOC later going on to challenge the CAS ruling in Swiss federal court.

The whistleblower, the lawyer said, "has become entangled in contradictions and manifest falsehoods in the proceedings. The story was by no means as he tells it today. Professor McLaren would also have had to recognize this at an early stage if his investigation did not lack the 'checks and balances' that are necessary and actually usual in scientific operations. This, too, became apparent in the procedure," Wieschemann added.

New Rodchenkov Act to Establish Criminal Penalties for Doping Use - US Senators
Ultimately, the attorney noted that the defence had presented evidence that the IOC itself had "seriously violated the procedural rights of the athletes and even withheld exculpatory evidence from the defence and the court."

With the Swiss Federal Supreme Court's dismissal of the IOC appeal against the CAS, Wieschemann emphasised that "There are no further appeals," and that his client Alexander Legkov "can rightly claim 'My medals are clean!' Congratulations."

After its appeal against the Legkov ruling was squashed, the IOC announced on its website that it will not challenge the CAS verdicts to acquit 27 other Russian athletes from their disqualifications from the PyeongChang games.

'Who Will Return Legkov His Two Lost Years?'

Legkov consistently denied the charges against him throughout his ordeal. In 2016, after he and fellow Russian cross country skier Maxim Vylegzhanin were banned from competition, Legkov insisted that "you'd have to be a complete kamikaze to [dope] in Russia if you're an athlete representing our nation."

Commenting on the groundbreaking Legkov ruling by the Swiss court, Russian sports journalist Oleg Shamonaev asked bitterly "Who will return him two lost years of his career?"

"It is unlikely that he will demand monetary compensation from the IOC for the unfair accusations, although the situation looks very ugly given all these trials and their results," Shamonaev wrote. The journalist argued that it would be nice to get "at least some justice," perhaps through the resignation of IOC disciplinary chief Denis Oswald, or a fine for Richard McLaren, whose claims, now proven false, destroyed the careers of dozens of innocent Russian athletes.

For the sake of fairness, below is the complete list of the athletes who were barred from the Pyeongchang Games whose acquittals the IOC has said it will not challenge following the Legkov ruling, thus clearing their names:

Correction: An earlier version of this story implied that Christof Wieschemann represented all of the above-listed athletes against the IOC. This is incorrect. Wieschemann was the lawyer only for Alexander Legkov and Evgeny Belov.