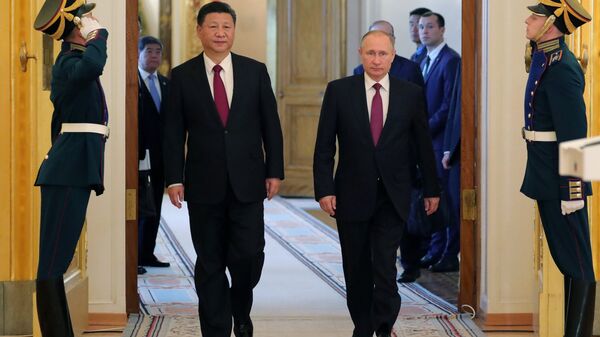 © Sputnik / Michael Klimentyev
/
Go to the photo bank
Subscribe
Ekaterina Blinova
All materialsWrite to the author
Russia and China seem to be destined to move closer as the two Eurasian giants are largely complimentary in terms of economy and security, independent political risk analyst Eric Kraus told Sputnik, commenting on Zbigniew Brzezinski's warning about "the most dangerous scenario" for the US.

"Twenty years ago, the main relationship for virtually every country on Earth was with Washington — today, it is increasingly their relationship with China," says Eric Kraus, an independent political risk analyst.

On 10 January, the Center for the National Interest, a Washington think tank, held a discussion eloquently titled "China and Russia: New Best Friends?" It was organised by Graham Allison, Douglas Dillon Professor of Government at Harvard University's John F. Kennedy School of Government, as well as the Center's President and CEO, Dimitri K. Simes.

The participants recalled the late Zbigniew Brzezinski's warning that "the most dangerous scenario" for the US would be "a grand coalition of China and Russia… united not by ideology but by complementary grievances".

"Russia is clearly moving into a military, economic and, to some extent, cultural alignment with China", Kraus told Sputnik. "Whether we call it an alliance, an alignment, a partnership or something different is only semantics. Neither country is interested in being locked into a formal alliance compelling them to go to war in the event of a military conflict with some third party."

Commenting on why Beijing and Moscow still avoid declaring an official pact, the political risk analyst elaborated that "to announce a formal alliance would be needlessly provocative at a time when the Dragon is already the world's largest economy in PPP [purchasing power parity] terms, and is rapidly increasing its global footprint, inter alia via the One Belt — One Road initiative and economic partnerships the world over".

"The growing alignment is an entirely logical progression, as the two Eurasian giants are largely complimentary", he emphasised. "China is seeking to unify the Eurasian land-mass for commercial reasons, and is increasingly dependent upon Russian raw materials, agricultural supplies, transit corridors and certain technologies".

US Vice Admiral Calls for Boosting Navy to Counter Russia, China at Sea
At the same, the two powers "do not compete in any meaningful fashion, and each has been very respectful of the other's interests in their sole area of overlap — Central Asia", Kraus pointed out.

He noted that "neither country has natural allies, but together, they form a pole of sufficient size to provide an alternative to the Atlantic alliance to third parties, from Iran to Turkey to Africa".

"From the Russian standpoint, this may well be suboptimal — the ideal position for Russia would be a multipolar system where Russia could balance between East and West," he remarked. "Unfortunately, following the collapse of the USSR and several decades of absolute American hegemony, the US lost any sense of limitations or the need for diplomacy; their aggressive, domineering stance is forcing the world into a bipolar system, with countries increasingly obliged to pick sides. The lessons of the 20th Century have been quickly forgotten." 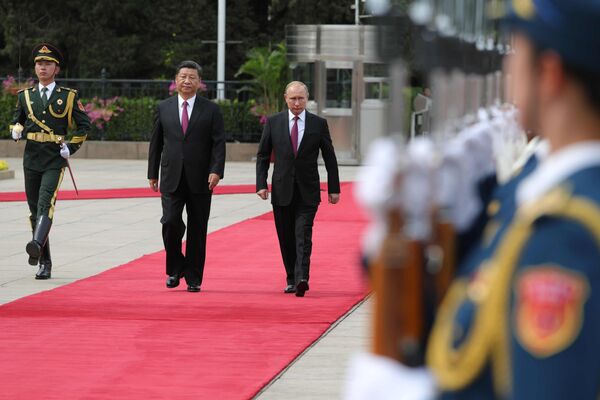 Sino-Russian Rapprochement Was by No Means Self-Evident

As for Washington's inability to foresee the emerging entente, Kraus opined that "a Sino-Russian rapprochement was by no means self-evident" and admitted that Washington's "increasingly aggressive stance" had obviously accelerated it.

"Given the long history of tension between the two Eurasian giants — from the Tsarist expansion into Siberia in the 19th century to the personal hostility between Mao and Stalin, as well as Russia's historical tendency to look West to Europe, huge cultural barriers had to be dismantled," he explained.

Russia Buys Yuan Reserves: Still Long Way to Go on Ditching Dollar - Pundits
However, as the political risk analyst remarked, "necessity is the mother of invention": "China has been vital in defeating NATO attempt at isolating Russia, while Russia frees China from the threat of naval blockade or the fear of invasion across her sparsely-populated Western border."

He underscored that the two countries has made impressive progress, "from the largest joint military exercises in Chinese history to the massive build-up of energy infrastructure".

"Russia-China trade has now increased to $110 billion per annum — increasingly with settlement in national currencies. Russia has been substituting dollar reserves with the yuan. Large numbers of Russians are now learning Chinese — cultural exchanges are thriving", Kraus emphasised.

Having said that "Russia has now removed all restrictions on sale of top-end military hardware to China, and further cooperation in aerospace is to be hoped for", the analyst noted that "there is still a long way to go". He referred, in particular, to Hong Kong banks' hesitation to lend to Russia due to US sanctions.

"Imperial hubris is ultimately deadly, and the recent incompetence of American foreign policy has been a wonder to behold," Kraus continued. "Anyone with even a passing familiarity with 19th Century European diplomacy will note that the great powers sought to prevent alliances between their opponents as a matter of course, doing whatever possible to divide and conquer."

Brexit Won't Turn UK Into 'the Empire on Which the Sun Never Sets' – Analyst
To illustrate his point, the analyst referred to Great Britain's constant efforts "to maintain a continental balance of power, allowing its naval empire to go unchallenged forestalling a Franco-Russian alignment at the expense of Turkey which would have threatened the straits, and thus, access to the crown jewel of the British Empire, India".

"Totally intoxicated with its own triumphant rhetoric and having lost any sense of its own limitations, despite China being the only country to pose an existential threat to American hegemony, the United States offers a striking example of diplomatic blundering: having done everything possible to drive Russia into the arms of China, creating its own worst nightmare," the political risk analyst elaborated.

He recalled that "a decade ago a highly-placed insider in the Washington policy establishment" told him that "Russia was so afraid of China that they would be forced to beg Washington for a military alliance — at whatever cost the Pentagon choose to impose." Kraus noted that "amazingly, that man still has a job — but in fairness, this was very much the official stance".

"To now admit the failure of their approach would be political suicide, so having first explained that the alliance was impossible, then attempting to minimise it as it blossomed; the official discourse has now shifted to a 'yes, it's true — but it's to Russia's disadvantage' — once again, nonsense; thus far it has proved a win-win," he stressed. 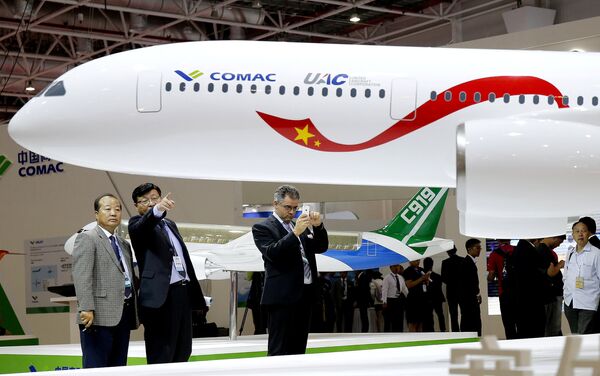 A model of a widebody jet, which is planned to be developed by Commercial Aircraft Corporation of China (COMAC) and Russia's United Aircraft Corporation (UAC) is presented at an air show, the China International Aviation and Aerospace Exhibition, in Zhuhai, Guangdong Province, China, November 2, 2016
© REUTERS / China Daily

According to Kraus, Russia and China "appear fated to move closer" together while American governance "has become dangerously dysfunctional" as "the famed two-party system has collapsed into a single party, characterised by several factions in a state of latent civil war".

No One Dares Tell Soros the Post-WWII System Is No Longer Relevant – Analyst
"With the Democratic party having become as militaristic as its rivals, any attempt at moderation or diplomacy is taken as a sign of intolerable weakness", the political risk analyst highlighted. "There is thus no realistic prospect of a less aggressive stance from Washington, leaving China and Russia no choice other than to push back against imperial overreach".

However, according to Kraus, Beijing and Moscow's positions "are not entirely equivalent". "On a glide-path to geopolitical dominance, China is the rising superpower — time is on the side of Beijing, and currently, China, the ultimate disruptive power, seeks to avoid open conflict and premature confrontation."

One the other hand, Russia, "is once again fated to be on the front lines — with a stark choice between resisting Western aggression and accepting American dominance. Those familiar with Russia history, know what her choice will be", the analyst underscored.