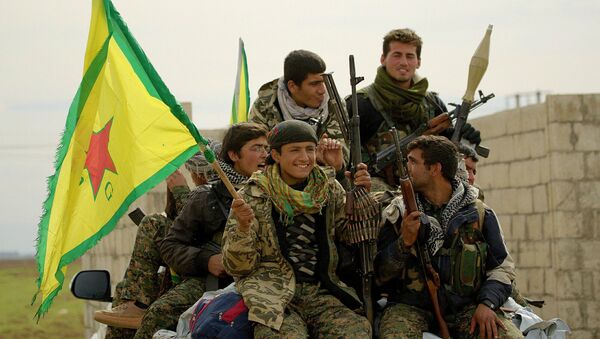 The statement came a few days after at least four US servicemen were killed in a suicide bombing in the northern Syrian city of Manbij. Daesh* (ISIS) reportedly claimed responsibility for the attack, which occurred amid the ongoing US troop withdrawal from Syria, announced by President Trump in December 2018.

Turkish Foreign Ministry spokesman Hami Aksoy has warned Syrian government forces not to take over the city of Manbij in northern Syria.

"The Kurdish People's Protection Units (YPG) should not be allowed to let forces of the regime [of Syrian President Bashar Assad] enter Manbij," Aksoy told a news briefing on Friday.

He also noted that "the withdrawal of American troops from Syria should not play into the hands of YPG terrorists and the [Kurdish] Democratic Union Party (PYD)".

READ MORE: Manbij Deal a 'Gateway to Rapprochement' Between Kurds and Damascus

The remarks came after an Operation Inherent Resolve spokesperson tweeted earlier this week that several US servicemen had been among the 16 people killed in a suicide bombing in the northern Syrian town of Manbij. The terrorist group Daesh reportedly claimed responsibility for the attack.

The spokesperson added that the US servicemen were killed during an explosion while conducting a routine patrol in Manbij.

The bombing occurred following US President Donald Trump's announcement in December that Washington plans to withdraw roughly 2,000 US troops from Syria within the next several months, in a move that Trump claimed can be explained by the fact that American forces had implemented their task of obliterating Daesh in the Arab country.

In early June, US Secretary of State Mike Pompeo and Turkish Foreign Minister Mevlut Cavusoglug agreed on a roadmap related to the pullout of YPG forces from Manbij in order to maintain stability in the area.

Turkey Urges US to Prevent YPG Redeployment From Syria's Manbij to Afrin
In mid-January, Turkish President Recep Tayyip Erdogan announced that Ankara will create a 32-kilometre safe zone in Syria, earlier suggested by the US, and that the zone may be expanded in the future.

Ankara has repeatedly expressed concerns over US support for the YPG, which is viewed by Turkish authorities as an affiliate of the Kurdistan Workers' Party (PKK), designated as a terrorist organisation in Turkey.

Ankara blames Washington for failing to fulfil its promises regarding the withdrawal of the YPG, which liberated Manbij from Daesh in June 2016.

*Daesh (ISIL/ISIS/Islamic State), a terrorist group banned in Russian and a host of other countries