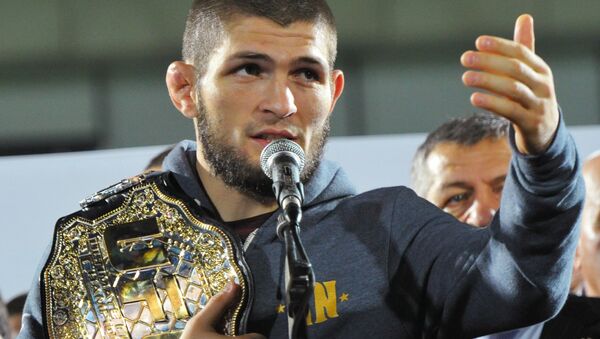 © Sputnik / Said Tsarnayev
/
Go to the photo bank
Subscribe
While Khabib does not seem keen to go up against McGregor again anytime soon, his head coach Javier Mendez has different ideas, arguing that such a match-up could rake in an incredible amount of money.

UFC lightweight champion Khabib Nurmagomedov has announced that he is in no hurry to have another match with Conor McGregor, and apparently it is about contempt rather than fear, according to TMZ Sports.

"He didn’t deserve this," he said when approached by journalists shortly after his arrival in Australia on Wednesday. "Rematch for what?"

And when the reporter brought up "all the talking Conor did before their fateful showdown", Khabib reminded him that despite all that talk, once the fighters got inside the cage, McGregor "don’t do nothing".

Earlier this month, UFC president Dana White said that the rematch between the two fighters may take place sometime in 2019.

UFC Santa: Khabib Vows to Fulfil Dreams of Young Fans After Getting Letters
His speculation was also echoed by Khabib’s head coach, Javier Mendez, who pointed out that it’s hard to tell who Nurmagomedov wants to face in his next fight, and that "the person with the best thoughts on what Khabib’s going to do is his father".

"That’s the biggest money fight in MMA bar none. There is nobody in MMA that can bring that kind of money that Khabib and Conor can in the rematch," Mendez told Off The Brawl, adding that the event might be held at the AT&T Stadium.

Nurmagomedov defeated McGregor at the T-Mobile Arena in Las Vegas on 6 October 2018 at UFC 229, thrashing him into submission with a neck crank late in round 4, securing his 27th straight victory.