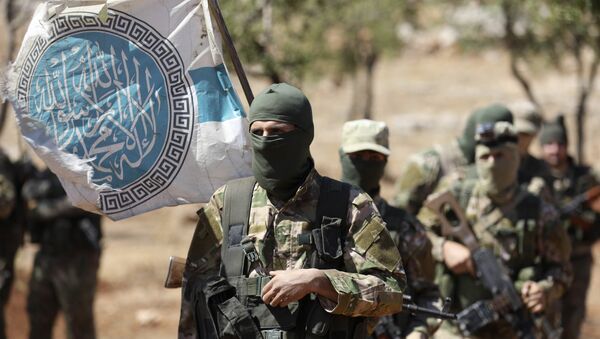 © AFP 2021 / OMAR HAJ KADOUR
Subscribe
Syria's Idlib Province is the last major stronghold of jihadist groups in the war-torn country, with up to 80,000 militants thought to be concentrated in the area.

The "Free Syrian Police", a 3,300-person strong police force which had received substantial support from the British and Dutch governments, has been dismantled after Hayat Tahrir al-Sham, an alliance of jihadist groups including the Nusra Front*, took over the majority of Idlib Province in recent infighting, the Middle East Eye (MEE) has reported.

The police force was dissolved as part of the terms of an agreement between jihadist and non-jihadist militants, with territories not governed directly by Turkey coming under the control of the militants' National Salvation Government, which controls much of Idlib.

Syrian Army Will Liberate 'Every Inch of Syria' Even if US Doesn't Leave – MFA
Citing local media, the MEE noted that Hayat Tahrir al-Sham-affiliated "Islamic police" will now be deployed to the area to fill the void.

"The damage in the region will not be limited now [that] the Free Syrian Police have stopped working on security, corruption and the spread of robberies and crimes, but a large number of police officers who are defectors from the Syrian government will be harmed and become unemployed, and this will damage society in general," Fadi Yassin, a resident and activist in the town of Kafr Rumah, told the outlet.

Half a dozen Western countries, including the United Kingdom, have provided support to the Free Syrian Police. Last month, the UK's Foreign Office accused the BBC of "inaccurate and misleading" reporting after it alleged that money going to the policing force had instead been reaching Nusra Front terrorists.

Late last month, Syrian Foreign Minister Walid Muallem said that Damascus's priority remains the liberation of Idlib Province from the terrorist groups concentrated there. On 8 January, Syrian media reported that additional troops had arrived in the provinces of Idlib, Aleppo and Hama to repel Hayat Tahrir al-Sham militant attacks amid terrorist threats to shell residential areas of Aleppo and conduct other provocative operations.

*Aka al-Qaeda in Syria. A terrorist group outlawed in Russia and many other countries.

000000
Popular comments
Another covert GB sponsoring of terror. At least the British know where their austerity money is going.

md74
18 January 2019, 14:08 GMT4
000000
A staged chemical attack in Idlib should be on the way. It would serve as a nice distraction from the yellow vest movement, brexit debacle, american idiocy in Manbij etc.,etc. The white helmets shouid be in position with their garden hoses, ready to spray down the "victims". southfront.org/syrian-war-report-jan-16-2019-chemical-attack-preparations-in-idlib-de-escalation-zon southfront.org/russia-brings-witnesses-to-hague-to-debunk-douma-chemical-attack-accusations-against-