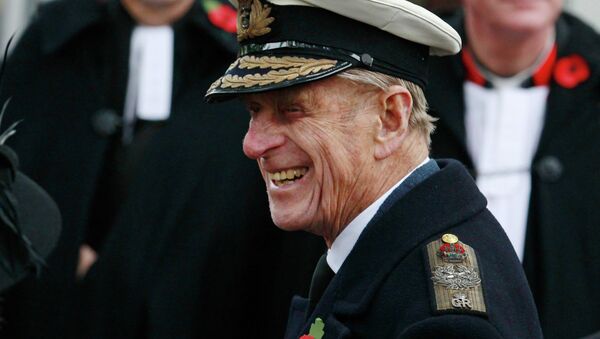 © REUTERS / Luke MacGregor/Files
Subscribe
Police have launched an investigation following a shocking car crash yesterday involving one of the most senior members of the British royal family, Prince Philip, who is said to be resting up at home following the ordeal.

A man has explained how he pulled a "very shocked" Prince Philip from his Land Rover after it was violently turned over in a car crash.

Roy Warne, 75, said that the 97-year-old prince was left "very shaken" following the smash-up near the Queen's Sandringham Estate in Norfolk, southeast England. Philip walked away from the accident, which happened on Thursday 17 January, relatively unscathed.

At this point I'm convinced Prince Phillip is just sampling different ways to die before he finally makes up his mind.

​Mr Warne has been widely quoted across British media as saying that he pulled the Duke of Edinburgh from his overturned vehicle.

"I looked down and had the prince's blood on my hands. All I could think is, thank god there wasn't more," Warne told the Sun newspaper.

Am I the only person wondering what the hell a 97 year old man, no matter who he is, is doing behind the wheel of a car in the first place? Absolutely balmy. #princephillip

​Reportedly, as his body was being pulled from the crunched up wreckage, Philip screamed "my legs!" Yet Mr Warne said that the ageing prince "didn't seem to be in pain, I think he was pretty clearly concerned and very shocked in the circumstances. It was a horrendous accident, it's just amazing that nobody was seriously injured."

While Philip managed to escape the collision relatively unharmed, considering the state of his car, the person driving the other vehicle involved in the accident needed medical treatment.

Prince Phillip, 97, involved in crash. Range Rover overturned. Said to be shaken, but unhurt. Boy is he in trouble. Time to take the keys away. pic.twitter.com/qpuvYOiX2d

​Warne described in detail the dramatic moment that he saw Prince Philip's car doing mid-air flips: "it came across the A149 like a somersault. It was turning on its side over and over," he reportedly said. After dragging Philip from the car, Warne said that the prince "stood up and was unharmed but was obviously very shocked."

The bystander rescuer also described how he heard Philip tell the police he had been "dazzled by the sun" while driving, perhaps accounting for why he crashed.

The police subsequently released a statement which read, "the male driver of the Land Rover was uninjured. The female driver of the Kia suffered cuts while the female passenger sustained an arm injury, both requiring hospital treatment."