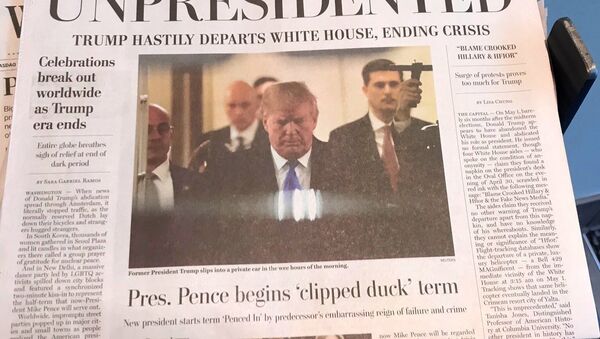 © Photo : John Moffitt /twitter
Subscribe
Bogus 1 May editions of The Washington Post filled with anti-Trump stories were handed out in Washington, DC, this week while a website was set up to mimic the influential newspaper. The authors say that the news about Donald Trump's resignation is fantasy rooted in reality.

The non-profit group The Yes Men has pulled off a prank at an "unpresidented" level, with activists passing around fabricated print copies of The Washington Post on Wednesday. The broadsheets, which mimicked the newspaper's old-school typeface, reported, citing "four White House aides", that Donald Trump had abandoned the West Wing without notice amid "massive women-led protests" and civil unrest.

The only message that the fugitive POTUS had left, the fake Washington Post says, was scrawled on a napkin and blamed "crooked Hillary", fake news and the mysterious "Hfior". The hoax story, dated 1 May 2019, hinted that Donald Trump could have left the White House in a helicopter that flew to the Crimean city of Yalta.

"The story this paper tells is more reasonable than our current reality", said writer Onnesha Roychoudhuri, one of the co-authors of the report. "And it's anything but far-fetched. We're already seeing unprecedented levels of protest and resistance. Now we just need to ask ourselves: What's next? This paper offers a blueprint to help us reclaim our democracy."

The real Washington Post has been made aware of the spoof; the newspaper's PR department has alerted its readers about it on Twitter, but some of them are apparently struggling to tell the fake news from real reporting.

There are fake print editions of The Washington Post being distributed around downtown DC, and we are aware of a website attempting to mimic The Post’s. They are not Post products, and we are looking into this.

Most people cannot tell the fake WaPo from the real WaPo.

000000
Popular comments
The zio oligarchs holding western main stream medias also own Hollywood, their expertise, like in the Talmud, is to project their immoral desires in writing disguised as a prophecy from the past. Similarly they project in their movies the ideal world in their image, then search for "facts" to corroborate their delusions in their media, NGOs, and UN general assembly speeches. The more we all study the "snake" the more we all become "snake handlers". Indonesians for example do not fear snakes: "...the skinned snake is chopped up into small pieces, skewered onto sticks, and barbequed over a hot grill. It is served as snake satay, dripping in peanut sauce and spices."
guillaume
17 January 2019, 13:15 GMT
000000
Newsfeed
0
New firstOld first
loader
LIVE
Заголовок открываемого материала
Access to the chat has been blocked for violating the rules . You will be able to participate again through:∞. If you do not agree with the blocking, please use the feedback form
The discussion is closed. You can participate in the discussion within 24 hours after the publication of the article.
To participate in the discussion
log in or register
loader
Chats
Заголовок открываемого материала
Worldwide
InternationalEnglishEnglishMundoEspañolSpanish
Europe
DeutschlandDeutschGermanFranceFrançaisFrenchΕλλάδαΕλληνικάGreekItaliaItalianoItalianČeská republikaČeštinaCzechPolskaPolskiPolishСрбиjаСрпскиSerbianLatvijaLatviešuLatvianLietuvaLietuviųLithuanianMoldovaMoldoveneascăMoldavianБеларусьБеларускiBelarusian
Transcaucasia
ԱրմենիաՀայերենArmenianАҧсныАҧсышәалаAbkhazХуссар ИрыстонИронауОssetianსაქართველოქართულიGeorgianAzərbaycanАzərbaycancaAzerbaijani
Middle East
Sputnik عربيArabicArabicTürkiyeTürkçeTurkishSputnik ایرانPersianPersianSputnik افغانستانDariDari
Central Asia
ҚазақстанҚазақ тіліKazakhКыргызстанКыргызчаKyrgyzOʻzbekistonЎзбекчаUzbekТоҷикистонТоҷикӣTajik
East & Southeast Asia
Việt NamTiếng ViệtVietnamese日本日本語Japanese俄罗斯卫星通讯社中文（简体）Chinese (simplified)俄罗斯卫星通讯社中文（繁体）Chinese (traditional)
South America
BrasilPortuguêsPortuguese
NewsfeedBreaking
05:10 GMTSociety Cannot Be 'Held Hostage' by Unvaccinated, Finnish Health Boss Claims
04:30 GMTGimme That: Adorable Golden Retriever Twins are Ready for a Treat
04:16 GMTUS House Armed Services Committee Warns Troubled F-35 Program May Become Unsustainable at Its Peak
04:01 GMTUS Civil Rights Leader Applauds Police Chokehold Ban, Urges Congress to Move on Floyd Act
03:55 GMT'Cut Him Off Now!': Newsmax Host Loses Cool After US Vet Critiques Trump Over Afghan Withdrawal
03:20 GMTUK High Court Rules Will of Prince Philip to Remain Sealed for 90 Years
02:31 GMTUS Coast Guard Joins Australia Navy for 3-Day Exercise in South China Sea
01:56 GMTAlex Murdaugh and The Fall of a Southern Dynasty
01:33 GMT'At the End of the Occupation' Country Faces Many Challenges - Head of Afghan National Peace Council
01:11 GMT'Human-Sized Penguin' Uncovered by New Zealand Schoolchildren Reveals Ancient Species
00:52 GMTTrump Expresses Sympathy for US Capitol Riot Suspects Ahead of September 18 Rally
YesterdayUS Approves $500Mln Military Sale to Saudi Arabia to Support Copter Fleet - Pentagon
YesterdayMinneapolis Police Department Buys ‘Not-Reaching Pouches’ to Reduce Deadly Traffic Stops
YesterdayTexas Governor Says Biden Administration Had Plans to Close Section of US-Mexico Border
YesterdayBotched FBI Probe Into Nassar Abuses Highlights ‘Endemic Failures’ Within Bureau, Former Agent Says
YesterdayTwitter Goes Bonkers After Star Batsman Virat Kohli Quits as Skipper of India's T20I Cricket Team
YesterdayHuman Hair as Pet Food? Indian Scientists Develop Unique Way to Use Keratin Waste
YesterdayBiden Retrieved on New Attack Ad Against Buttigieg Over Fears of Reprisal, Book Claims
YesterdayHow New Book About Trump Misfired, Inflicting Further Damage to Biden's DoD After Afghan Debacle
YesterdayUS Grand Jury Indicts Clinton-Linked Attorney for Making False Statements to the FBI