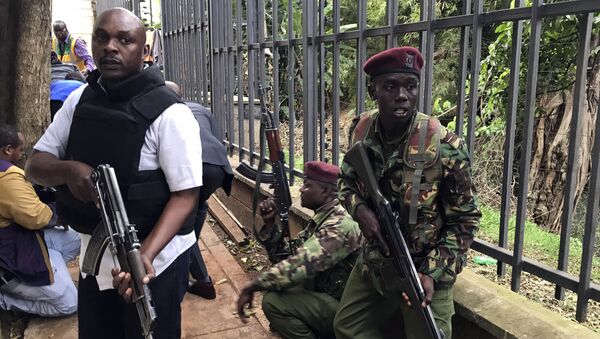 21 civilians and five attackers were killed in a gun and bomb attack on a hotel complex attack in Nairobi, Kenya on Tuesday night, with al-Qaeda linked terrorist group Al-Shabaab claiming responsibility for the carnage.

Jason had survived the 9/11 terror attacks in New York City 17 years earlier, and attempted to help survivors escape to safety in the earlier attack, his mother said.

"That's exactly the kind of person he is. I have no doubt that when he heard the explosions outside the hotel, he was one of those trying to jump in and help," Yu said, speaking to the Washington Post.

50 People Missing After Terrorist Attack at Nairobi Hotel - Kenya Red Cross
Jason's brother Jonathan Spindler, who also confirmed his brother's death on Facebook, said he wasn't likely to have died without a fight.

"Jason was a survivor of 9/11 and a fighter. I am sure he gave them hell!" he wrote, according to Reuters.

Spindler's family is en route to Kenya to retrieve his body. He would have turned 41 on Monday. "We all miss him so much. And it's so sad that such a bright young person is taken away by terrorism," his mother told NBC News.

After the 9/11 attacks, the Houston native volunteered for the Peace Corps in Peru, later starting a career in investment banking. Spindler was the CEO of I-Dev International, an investment advisory firm operating in Third World markets, and was in Kenya on business.

The al-Shabaab militant group, which claimed responsibility for Tuesday's deadly attack, said their attack was "a response to the witless remarks of the US president, Donald Trump, and his declaration of [Jerusalem] as the capital of Israel," AFP reported, citing jihadist terrorist tracking group SITE.

Al-Shabaab Attack Kills 21, Injures 30 at Hotel Complex in Nairobi - Reports
On Wednesday night, the Kenya Red Cross Society reported that 21 civilians had been killed in Tuesday night's violence, with five attackers also killed by security forces. In addition to Spindler, the civilian deaths included a UK national, Luke Potter. The whereabouts of 50 people staying at the Dusit Hotel, the site of the terrorist attack, remain unknown, according to the Red Cross. The terrorist siege included a suicide bombing and mass shootings, and lasted some 20 hours.

al-Shabaab is an Islamist fundamentalist group operating in Somalia, as well as Yemen, Ethiopia and North Africa. In 2012, the group pledged its allegiance to al-Qaeda,* which claimed responsibility for the 11 September 2001 terrorist attacks. The US has repeatedly attacked al-Shabaab in drone strikes, and has issued bounties on its senior commanders. The group has carried out numerous terrorist attacks, including the 2003 Nairobi mall attack which led to the death of 71 people and left 175 wounded.