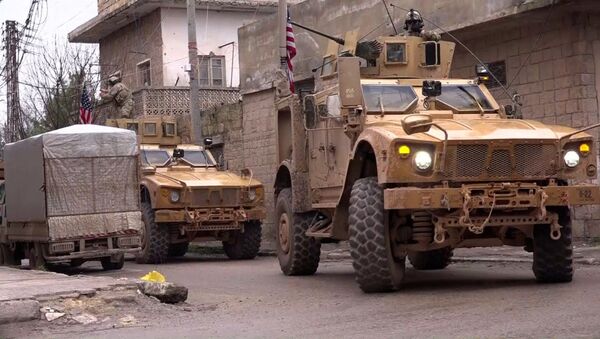 On Wednesday, over 20 civilians were killed and 19 others wounded as a result of an explosion in the centre of the city of Manbij, while a US military patrol was passing.

The military council of Manbij, Syria said that militants who had been plotting new terror attacks and who were getting orders from Turkish intelligence have been arrested.

"The antiterrorist squads of the council detained a cell of seven militants — members of opposition groups that participated in Operation ‘Euphrates Anger' and were supported by Turkey, acting in concert with Turkish intelligence," the statement said.

Erdogan: Terror Attack in Manbij, Syria May Be Aimed to Influence US Withdrawal
A large number of weapons and ammunition, including grenades, Kalashnikov assault rifles and M6 rifles were seized from the militants during the searches.

A blast rocked a busy street in the Kurdish-held city of Manbij on 16 January. United States Central Command has confirmed that four Americans died as a result of the suicide attack. The Daesh* terrorist group reportedly claimed responsibility for the attack. According to the local military council, the blast occurred near a military patrol of the international coalition in the city.

The news came amid President Donald Trump's decision to withdraw US troops from Syria.

In mid-December, Turkish President Recep Tayyip Erdogan announced that Turkey was ready to launch a military operation against the Kurdish-led People's Protection Units in Syria's Manbij if the United States did not remove the militia from there.

After a phone conversation with Donald Trump on 14 December, Erdogan said the military operation in Syria would be postponed.