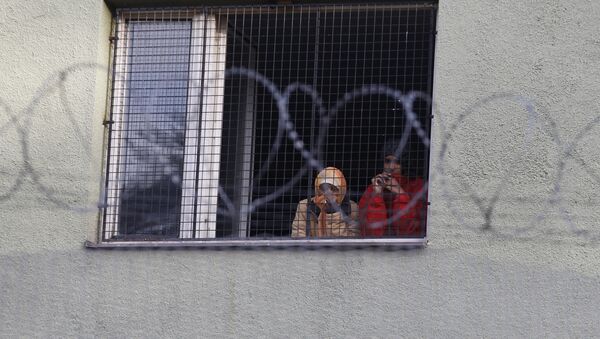 © AP Photo / Petr David Josek
Subscribe
International
India
Africa
Under the regimes of Saddam Hussein and Muammar Gaddafi, the Iraqi and Libyan people didn't live so badly; democracy was thrust upon those who didn't really need it, and as a result, Europe has been flooded with migrants. This is what Czech politician and the chairman of the country's Republican Party, Miroslav Sládek, has told Sputnik.

Sputnik: In general, if the Republicans managed to intervene in politics, your party's programme indicates that you would cancel the post of ombudsman and switch to Eastern European time. In addition, people must, in your opinion, have the right to have guns legally. Politically correct politicians may feel sick from these statements…

Miroslav Sládek: We would like to see some institutions not only cease to exist in the Czech Republic, but the EU could also do without some of them. This also applies to the rest of the world. For us, the main thing is to save money. Why maintain the UN, if it is, without doubt, an insignificant organisation? The organisation steals money (for example, the scandal with the Oil-for-food program — Sputnik) Those in need get nothing. Why maintain an overgrown center in Brussels?

As for weapons: people have the right to protect their property and the lives of their loved ones. Criminals will always get their hands on weapons, the same goes for migrants. When someone breaks into your apartment, there will be nothing to talk about.

Sputnik: You've also spoken of the perversion of culture in the Czech Republic. How do you describe this?

Miroslav Sládek: I have never been politically correct. If we do not call a spade a spade, we find ourselves in the kingdom of curved mirrors. Look at our popular scene: the singer is not even singing. He gets naked on stage, and even has a sponsor for this. For an actor to succeed, he must declare himself homosexual everywhere. This is a perversion that threatens, above all, young people.

20,000 Armed Migrants Ready to Enter via EU Border – Report
Sputnik: Who is to blame? Is it mistakes in raising children? But what if people want to see this? If they're asking for it?

Miroslav Sládek: The media imposes it on them so that they can manipulate people. We have a reality show where two naked people are left in a forest for two weeks. It ends just like in the movie "The Running Man", blood may be spilled in the end. That's how control of the masses is maintained. Life is dosed by emotions like a drug. Initially one dose is enough, then two doses. And so the dose is constantly increased. How is society purposefully broken down? First, you need to break down the family with the help of explanations that there is no need for a family to exist at all. Then women marry women and men marry men.

I was not a supporter of Saddam or Gaddafi. But under them their people did not live too badly. Oil revenue was divided among the people. Did you ever hear of anyone under Muammar Gaddafi inflating a boat and sailing to Europe? Democracy was forced upon those who didn't really need it, and now Europe is being flooded with migrants.

Sputnik: Is it possible to count how many people lost their lives because of the current world order, and not communism or fascism?

Miroslav Sládek: As for current victims, today no one is encouraging one to act against their will. Nothing is being imposed. People themselves at a personal level allow themselves to be manipulated. This is not the way communists appropriated us (Czechoslovakia) after the Second World War. This is not even the era of Nazism, when Nazis invaded Europe with the aim of occupying it. People today make their own decisions. Therefore, from this point of view, I do not consider, for example, the annexation of Crimea to Russia a military operation. People just decided this. The decision that Crimea should go to Ukraine was once made by communist leaders in Moscow. Our modern system is at the local level, it is not installed by someone from the outside.