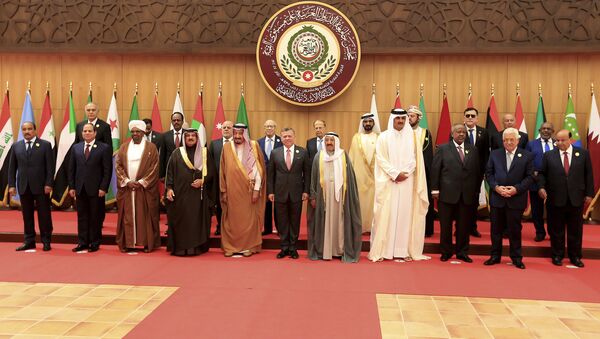 ST. PETERSBURG/BEIRUT (Sputnik) - The participants of the Economic Summit of the Arab League will discuss joint economic and social projects of the Arab world at the meetings in Beirut taking place on 17-20 January.

Arab League’s Assistant Secretary-General Hossam Zaki told Sputnik Thursday he could not confirm the statement made by the Syrian Envoy in Lebanon that Damascus received an invitation to attend the economic summit in Beirut, but refused to participate.

"No. I cannot confirm this statement. Nothing has changed since the last time we spoke on Saturday," he said.

As for now, it is known that the discussions on Syria will not be included in the program due to the absence of a delegation from Damascus, a source in Lebanon’s Foreign Ministry told Sputnik.

"There is nothing that will directly involve Syria and can be discussed in its absence. This is a general Arab meeting. Meetings that will take place before the meeting of the heads of state at the ministerial level or level of permanent representatives may raise certain issues, which are not included in the general agenda of the summit, but we are not aware of this," the source said.

Lebanese Army Closes Coastline for Private Vessels Over Arab League Summit
Earlier on Saturday, Zaki told Sputnik that Syria had not been invited to take part in the summit in Beirut. He also said that Syria's invitation to the organization's summit in Tunisia in March would not be discussed during the economic summit in Beirut.

The organizers of the summit in Beirut reported Monday that 24 items on general Arab economic and social issues were planned for discussion. It is expected that three working sessions will be held: those of relevant ministries, foreign ministers, and working groups. The final meeting of the heads of state will conclude the summit. It is believed that, based on the summit outcome, a final resolution and the Beirut declaration will be adopted.

Meanwhile, a number of Lebanese activists had expressed their protest against the Libyan delegation’s participation in the forum. Arab media outlets published this week footage showing how alleged supporters of the Shiite Amal movement, whose leader is Nabih Berri, removed the Libyan flag from the summit venue, tore it up and replaced it with the flag of the Amal movement. Several hours after the media reports emerged, Libyan protesters attacked the Lebanese embassy in Tripoli, and the Libyan High Council of State called for suspension of diplomatic relations with Lebanon over the desecration of a Libyan flag in Beirut

Over 5,000 People Participate in Anti-Government Rally in Beirut on Sunday
Libya’s Government of National Accord (GNA) has announced that it had decided to boycott the Beirut meeting after the Lebanese government had failed to prevent desecration of Libya's flag in Beirut.

"This decision is regretful but it won’t affect our work or the summit’s agenda," Arab League’s Assistant Secretary-General Hossam Zaki told Sputnik Thursday.

The Arab League suspended Syria’s membership in 2011 after the war in the country broke out. Member states then recalled their ambassadors from the country. However, the Arab countries are now reportedly making steps to re-establish diplomatic ties with Damascus.