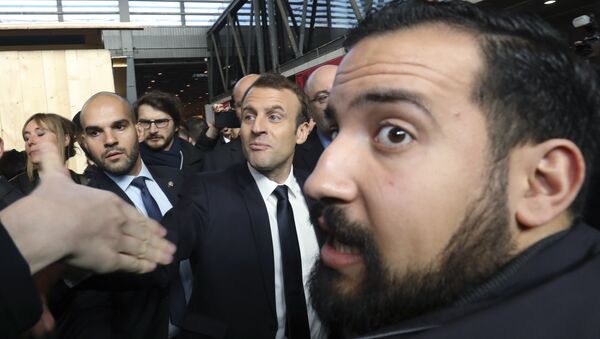 Alexandre Benalla, an ex-bodyguard and security adviser of French President Emmanuel Macron, is now in custody after authorities launched an investigation into his alleged use of diplomatic passports, the Paris prosecutor's office announced on Thursday.

This comes after reports that Benalla was fired after having been caught on camera hitting a protester in riot police gear during the May Day demonstrations in Paris. Later, media reported that the former aide continued to travel with a diplomatic passport even after leaving his post. The use of diplomatic passports was then confirmed by the former security aide himself.

French Foreign Minister Jean-Yves Le Drian decided to approach the prosecutor's office, with the preliminary investigation into the matter having been launched. The foreign minister requested Benalla return the passports on two separate occasions: 26 July and 10 September. However, Benalla returned the passports only earlier this month.

Macron's aide has been charged with several offences, including violent acts, interfering in the work of public services, wearing official insignia without authorisation, concealing video materials and breaching professional secrecy. Benalla responded to the accusations, saying he considered his actions during the demonstration legitimate, claiming that he tried to help police officers dealing with rioters.