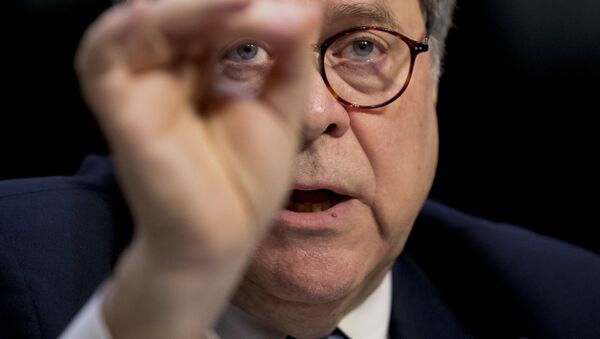 Barr, who was previously attorney general under President George H.W. Bush, has pledged not to hamper or end the Mueller investigation. If confirmed, Barr would replace acting Attorney General Matthew Whitaker, who took over the office after Jeff Sessions resigned from the position last year.

According to Schlesinger, Barr's historical views on the federal criminal justice system have generally supported mass incarceration. For instance, as deputy attorney general from 1990 to 1991 and as attorney general from 1991 to 1993, Barr played a big role in establishing more punitive criminal justice policies, including the Crime Control Act of 1990.

"It seems like he's [Barr] probably going to make it on through and be confirmed as attorney general, which is pretty upsetting, because it's probably hard to find someone who could be described as worse than Jeff Sessions, but Bill Barr pretty much hits those points," Schlesinger told hosts John Kiriakou and Brian Becker.

"I think the most likely outcome is that the nomination goes through committee and… he'll be the next attorney general, which creates all sorts of issues in our country. He had no problem imprisoning immigrants, he's very much in favor of an expanded view of executive power, and when it comes to issues of criminal justice reform… we couldn't have seen a more punitive time than when he was attorney general in the early ‘90s," Schlesinger added.

In 1992, Barr wrote a letter of support for a report by the Department of Justice titled "The Case for More Incarceration."

In his letter, he wrote that "there is no better way to reduce crime than to identify, target and incapacitate those hardened criminals who commit staggering numbers of violent crimes whenever they are on the streets," Vox reported.

"He was a big pusher of punitive laws… He thinks that putting more people in prison is a positive ting and that it reduces crime," Schlesinger told Sputnik.

"However, all the research we have on this tells us that there is absolutely nothing to support that," he added.