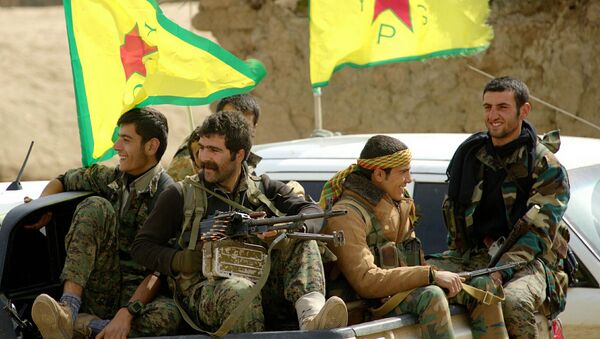 CC BY 2.0 / Kurdishstruggle / Kurdish YPG Fighters
Subscribe
On 15 January, Turkish President Recep Tayyip Erdogan announced that he and his American counterpart Donald Trump had reached a "historic understanding" on Syria in their latest phone call.

Kurdish-led Syrian Democratic Forces (SDF) forces said in a Wednesday statement they would help establish a US-proposed "safe zone" in northern and eastern Syria under "international guarantees" and without "foreign intervention", Reuters reported.

READ MORE: Erdogan Says Only Turkey Can Protect US Interests in Syria Amid Troop Pullout

Erdogan: Terror Attack in Manbij, Syria May Be Aimed to Influence US Withdrawal
The US-backed Kurdish forces further added they hoped to reach "agreements and solutions" with Turkey in order to secure stability in the border region.

The official said that the Kurds would only accept the deployment of UN forces along the separation line between Kurdish fighters and Turkish troops to prevent an offensive.

Erdogan's Spokesman Slams US Claims of Turkey Targeting Kurds as 'Irrational'
Following a phone conversation with US President Donald Trump, Turkey's Recep Tayyip Erdogan announced Tuesday that Ankara would create a 32-kilometre safe zone in northern Syria. Erdogan's spokesperson later elaborated that the security zone would be controlled by Ankara.

The spokesman further added that the Turkish military would coordinate their actions with locals.

The idea was initially proposed by Trump, who threatened on Twitter to "devastate" Turkey's economy if Ankara attacked US-allied Kurdish forces in Syria.

In response, Turkey said it may "remain hungry, without food and water", but will still fight terrorists.

Last month, Donald Trump declared victory over Daesh* in Syria, subsequently announcing the withdrawal of the 2,000 US troops currently deployed in the Mideast country. The president stated that regional countries, including Turkey, would wipe out the remaining terrorists.

Turkey's Erdogan Announces Creation of Safe Zone in Syria Suggested by Trump
Trump, however, stressed that he sought to protect US-allied Kurds while gradually pulling the troops out of the country, with White House National Security Adviser John Bolton calling the protection of Kurdish militia by Ankara a condition for the US withdrawal.

Edogan's spokesman Ibrahim Kalin hit back, saying it was a "fatal mistake to equate Syrian Kurds with the Kurdistan Workers' Party (PKK) and its Syrian branch PYD [Kurdish Democratic Union Party]/YPG [Kurdish People's Protection Units]". Ankara considers the YPG to be affiliated with the PKK, listed as a terrorist organisation by Turkey.

000000
Popular comments
I guess there are not many western war criminals willing to sign off the U.N mandate to make that happen... Oh now everybody loves the U.N and respects such an authority...
Conspiracy
16 January 2019, 11:30 GMT
000000
any "deal" done with the amis is a "fail." hello kurds, time to wake up.