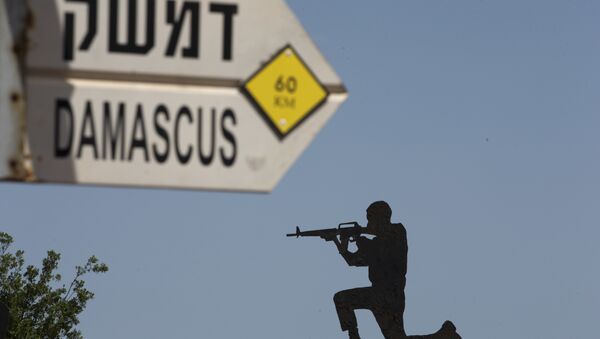 © AP Photo / Ariel Schalit
Subscribe
In a farewell interview with The Sunday Times this week, former Chief of Staff Gadi Eisenkot of the Israel Defence Forces said that Israel has been engaged in direct conflict with Iran on Syrian soil, systematically attacking alleged Iranian infrastructure without making any statements.

Sputnik has discussed the statement with Moshe Maoz, a professor of Islamic and Middle Eastern studies at the Hebrew University of Jerusalem, who served as an adviser to Prime Ministers Yitzhak Rabin and Shimon Peres, and who is one of the world's foremost experts on Syrian history and politics.

Sputnik: In your view, why has Eisenkot decided to speak out now?

Prof Moshe Maoz: I think he [follows] after the prime minister. Eisenkot is a very cautious person. He is not as arrogant as the prime minister. The prime minister wants to win the election, so he comes out with all these stories which are really unnecessary, unneeded altogether. And once the prime minister said it, before his retirement he mentioned the attacks, but it is not new, because these were already admitted [to] a month or two ago, that Israel has attacked targets in Syria – 200, even thousands. And I think it is so bad and not clever to say. Of course, we know that the Israelis are after Iran mostly, but not after Syria. Then it can embarrass Russia, because Russia has some sort of supervisory responsibility over Syria. Why clash with this major superpower? Even with Iran, it is not very clever to do it, but of course, it is more understandable. But still, I think it is surprising to me that he said it.

Sputnik: The comments come as Prime Minister Benjamin Netanyahu is facing pressure before the upcoming elections. Do you think this was done to somehow impact the vote?

IDF Chief Says Israel Struck Syria Without 'Asking for Credit' - Reports
Prof Moshe Maoz: Sure. No doubt about it. No doubt about. I mean very fresh news [inaudible]… He comes out and says that no prime minister before did it. Why? I mean, I cannot understand, except, and most analysts here also agree, that this was because of his election campaign. Of course, those who support him said “no, he is a brave person” and this and that. There is no more doubt about it. It is not only this, I mean, other issues too – “he is a hero, he is the defender of Israel and this is the king of Israel, the king of the Jews” – this is exaggerating.

Sputnik: Prime Minister Benjamin Netanyahu urged Iran to quickly remove its forces from neighbouring Syria, saying: “get out of there fast because we will continue our forceful policy of attacking”. What response can we expect from Tehran?

Prof Moshe Maoz: Iran doesn’t have a sense of humour when it comes to these kinds of threats, and Iran is not going to yield to this threat. And, in my opinion, although I would like to see negotiations, not a fight, Iran is not going to move out of Syria, whatever Israel does. And also Bashar Assad doesn’t want and cannot drive out the Iranians. Even Russia has some conflicts with Iran — there is cooperation, but also conflicts — can Russia drive away Iran from Syria? I doubt it. I think also the Russians said it. The Iranians were invited, like Hezbollah, to Syria. It is a very, very complex issue. Nobody talks about some sort of negotiation, some sort of the diplomacy. Always wars and attacks, and this and that, and Israel is no exception.

Sputnik: How high are the chances that Tel Aviv and Tehran can, if not bury the hatchet, normalise their relations?

Prof Moshe Maoz: This is my dream. I am not naïve and I know what is going on, but, in my opinion, once Israel agrees to settle the Palestinian issue, and especially the issue of Jerusalem or East Jerusalem and the Temple Mount or Haram esh-Sharif, Iran is not going to love Israel, but [it is] not [going] to be so antagonistic. And you know what?

Ex-IDF General Reveals Israeli Army's Deepest Secret
The Iranians said it themselves — even Ahmadinejad, who was a very, you know, extreme, radical leader he said: “if the Palestinians and the Israelis agree — who am I to intervene?” Now, again, they are not going to hug Israel, but they are not [going] to be so hateful. But Israel doesn’t think about it. This is one of the issues which really trouble me very much. As for the occupation, especially of Jerusalem, Israel is willing to give up relations, not only with Iran, but also with many Muslim countries. Israel has relations, but they are very superficial. But if you want true relations, deep relations, or stronger, deep ties, we have to solve this issue. Not because of the leaders; the leaders in the Arab world are cynical, [but for the] people. And Israel has to reach [out] to Muslim people. It is not only in the Muslim world, elsewhere too. Unfortunately, Israel is not doing it. Israel is for a status quo and this is not going to be in favour of Israel in the long run.