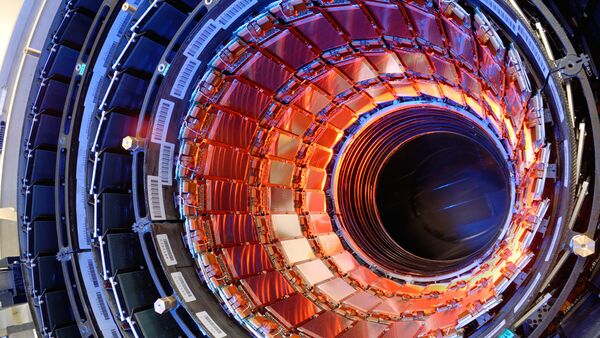 The European Organization for Nuclear Research, also commonly known as CERN, has presented plans to build a bigger, more powerful successor to the already existing Large Hadron Collider. The new accelerator will be called ‘Future Circular Collider’ and will cost around 20 billion pounds.

Sputnik has discussed the issue with Brian Foster, Professor of Experimental Physics at the University of Oxford.

Sputnik: What is an accelerator, this Future Circular Collider?

Brian Foster: An accelerator is a large object usually, which consists of sets of magnets and usually cavities of some description to accelerate particles.

Relativistic Heavy Ion Collider More Promising Than Large Hadron One - Scientist
And in order for them to be useful for science, you need to somehow collide them together in a circular collider: that is done by circulating in opposite directions around the large circumference, circle, and bringing them to interaction in particular areas around that circle where you place experiments, which can detect the debris from the collisions of the energetic particles interact.

Sputnik: Why does the CERN need a second accelerator?

Brian Foster: The reason why one would like to build a new collider is twofold. Firstly, the discovery of the Higgs boson particle, which gives mass to all of the other particles in the universe, was a landmark discovery of the LHC [Large Hadron Collider] a few years ago.

We need to study the Higgs boson in much more detail than we can at the LHC, and to do that we need to collide much simpler particles than the protons which are currently in the LHC.

This is called an electron positron collider, and the first step of the new server machine would quite likely be a machine which would collide electrons and positrons, and study the Higgs particle in great detail.

Science & Tech
Scientists Divided on Whether Blast Was Black Hole's Birth or 'Tidal Disruption'
A second step, maybe 20 years beyond that, would be to go to similar collisions to the LHC, but a factor of 10 higher energy, where it's quite likely that some new and fascinating phenomena could be understood; but in order to be sure about that, in order to get a better idea for what the energy of the machine should be, then it would be very useful to, first of all, use the electron positron machine to study the Higgs in great detail, where you can get hints for what might be discovered that much higher energies with proton interactions.

Sputnik: The Future Circular Collider will lie underneath inhabited areas, including the city of Geneva. Are there any risks concerning the safety of people living in the surroundings of the accelerator?

Brian Foster: There are essentially no risks. It wouldn't be allowed to be built, if there were any risks. The Swiss are notorious for their very stringent requirements for public safety, so you can be rest assured that were there the slightest risk to humans, then the project would have never been approved.

It's very deep underground, so although it produces quite substantial amounts of radiation, they're all absorbed in the rock well, well, well below the inhabited areas. Very careful studies will be made of the environmental interaction: it's possible that you could irradiate some of the groundwater, but that will be studied very carefully before any go ahead is given. So that can be discounted.

Science & Tech
Fuel for Atom Smashers: Siberian Physicists Develop Unique Collider Generator
The amount of energy producing the collisions themselves is absolutely tiny. It's absolutely, completely and utterly impossible, to find anything to be given out of for that is absolutely tiny — because what you're doing is concentrating two particles, protons, which themselves individually have a very tiny energy, and producing new particles, which are even a small fraction of that energy.

So it's not the collisions that can possibly give rise to any danger, it's simply the circulation of very large currents of protons, which eventually can give rise to radiation in the ring; but that will be shielded very substantially inside the tunnel in which the machine is, so that the amount of radiation leaving the actual machine itself will be so tiny it is to be at the level of the background radiation that you get anyway from rocks in that region.

So there is absolutely no danger, because, if there were the slightest danger, it would not be approved.

Views and opinions expressed in this article are those of Brian Foster and do not necessarily reflect those of Sputnik.