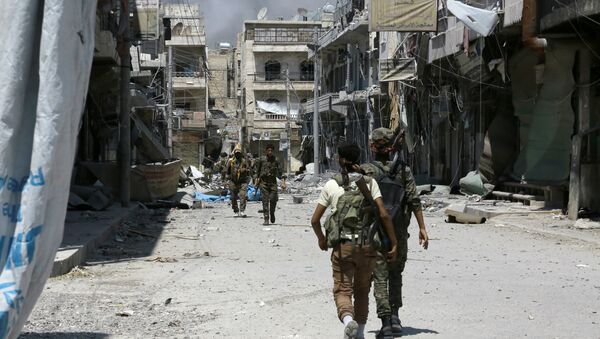 The powerful blast took the lives of over 20 people, including several US servicemen. Daesh* reportedly claimed responsibility for the deadly attack soon afterwards.

A CCTV camera captured the moment when a bomb rocked a busy street in the Kurdish-held city of Manbij on 16 January. A woman, wearing a black niqab, can be seen on the street just seconds prior to the blast, but it's unclear whether she actually was a suicide bomber and responsible for the attack. The footage, published by the outlet EHA News, shows several pedestrians near the epicentre of the explosion falling to the ground, with a boy running away scared immediately after the blast.

📌Explosion in #YPG held #Manbij
📌Reuters says at least 9 people including 2 #American soldiers dead and 20 people wounded
📌#ISIS took responsibility for attack
📌first attack of ISIS in which the terror group was this fast to claim responsibilitypic.twitter.com/P1iVyi8NAq

Daesh* has reportedly claimed responsibility for the deadly attack, which claimed the lives of over 20 people, including several US servicemen. The blast came in wake of the planned American military withdrawal from Syria, earlier announced by President Donald Trump, who claimed that the US had achieved its goal of eliminating Daesh*.