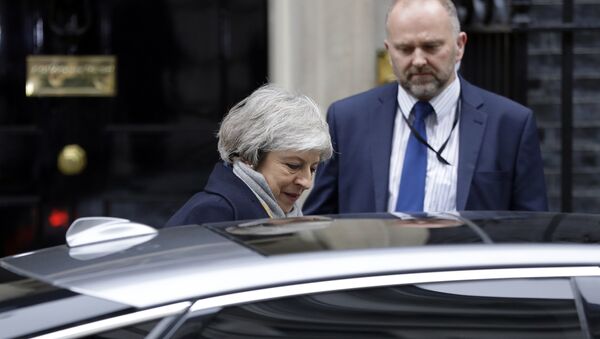 © AP Photo / Kirsty Wigglesworth
Subscribe
LONDON (Sputnik) - Baron Maurice Glasman, a Labour life peer from the upper chamber of the UK Parliament, expressed belief that UK Prime Minister Theresa May would survive the vote of no-confidence that she faced after the parliament rejected her Brexit deal, since her Conservative Party enjoys support of the Democratic Unionist Party (DUP).

Glasman, in an interview with Sputnik, voiced doubt that Labour Party leader Jeremy Corbyn would be able to unseat the government.

Sputnik: This was a heavy defeat for the government, were you expecting the result to be this decisive?

Glasman: I did expect the defeat to be this heavy…there's no basis for any consensus in the House of Commons. We have the curious coalition of Remainers who think they can still stay in and the No Deal Brexiteers, so together there was no chance for the government.

WATCH Bank of England Head Addressing UK Parliament After May Deal's Defeat
Sputnik: What about May's political longevity? The Conservative party have a history of turning on leaders who cease to fit the bill, and she's already had to face a vote of no confidence in her leadership.

Glasman: Yeah they spend their time talking about this but they haven't got a candidate in waiting. They usually, curiously, turn the screw when they think there's a secure succession, so they are deeply confused and don't know what to do, so I wouldn't be surprised if she stays in power.

Look they are going to put a vote of No Confidence…I don't think they'll win it…I think the DUP and Conservative party will see that off. Secondly, I'm not at all persuaded that Jeremy Corbyn and John McDonnell would not like a No Deal, I think that that's consistent with their whole politics to leave the EU…

So I think that the Labour leadership will essentially hunker down, attack the government and then try and blame the Tories when there's a No Deal Brexit. I think that's how it's going to go. So it's certainly very interesting now, they'll be many many attempts in Parliament to broker coalitions behind the backs of the front benches as there is a pro-remain majority but I don't know if they have the organisational skills to do that. So I think the line of attack is to bide time for getting an extension of Article 50, but I'd be surprised if the Labour leadership accepted that.

Sputnik: What about a second referendum?

Glasman: The problem is that they've left it really late. A referendum takes about six months to organise and the clock is ticking. So they'd need to get a very lengthy extension to Article 50 and once again I'm not convinced the Labour leadership would accept that. So as it stands the logic looks like No Deal, which is the real deal.

READ MORE: Turkeys (Whether They're Tory Ones or Not) Don't Vote for Christmas

Sputnik: There's of course been a lot of talk of economic collapse and doomsday scenarios involving Project Fear and so on, do you think tonight is likely to see a continuation of such claims? How much groups like UKIP, who seem to be undergoing a bit of a resurgence, capitalise on the situation?

'Beginning of the End of Brexit': UK Politicians on May Deal's Crushing Defeat
Glasman: Project Fear, I really do think…I'm willing to say a huge amount of this is overblown hysteria. Right after the referendum they said that they'd be a collapse of the pound, house prices would crash and we woke up the next day and it was curious. Everything seemed to be ok. I was very involved at Dover Port and I was told there that all this stuff about seventy-mile queues was just propaganda. They don't expect anything like that to happen. But that's what we've got to live through for the next ten weeks.

We'll get everything blamed on Brexit, but the real thing to keep your eye on is working class support for Brexit, which is absolutely rock solid. That is in Labour's grasp. If Labour can firmly commit to Brexit then UKIP is finished and will remain finished. If Labour looks like a Remain party and is going to extend Article 50 or go for a "people's vote" then the Labour vote will really fall, and I know that Jeremy Corbyn and John McDonnell are very concerned by that. They are pro-working class people. But I see no evidence of the growth of UKIP whatsoever. They collapsed at the last election and when both (major) parties committed to respecting the referendum result at that election UKIP didn't figure.