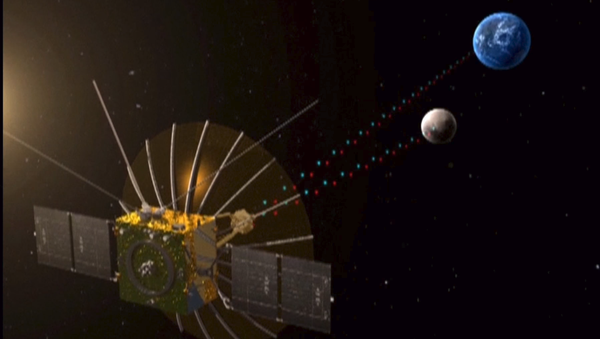 As the Chinese space program surges ahead, the US’ space missions are somewhat stagnating. When China was planning its historic Chang’e-4 moon probe, the US asked Beijing to let them use it to help their own moon mission, the head of China’s lunar program said recently.

Wu Weiren, the scientist in charge of the China National Space Administration's (CNSA) lunar program, said on CCTV recently that several years ago, his colleagues at the US space agency NASA had asked his crew to put a beacon device on Chang'e-4, saying it would come in handy during a future US mission to the moon, the South China Morning Post reported Wednesday.

The US reportedly also asked CNSA to extend the three-year lifespan of the Queqiao communications satellite, which Beijing placed in a special orbit behind the moon last summer, for the express purpose of relaying communications between Earth and the far side of the moon, which never faces our planet.

"We asked the Americans why they wanted our relay satellite to operate longer," Wu told CCTV, noting that the US was among half a dozen countries that collaborated with China on the project. "They said, perhaps feeling a little embarrassed, that they wanted to make use of our relay satellite when they make their own mission to the far side of the moon."

Chang'e-4 made history on January 3, when it became the first human craft to land on the moon's far side.

"They have always wanted to measure the impact of meteorites on the moon," Wu said of the Americans. "This time, we have such a great opportunity, so America wants to take this opportunity, and we are willing to work with them."

Of course, the ability to pursue that cooperation is somewhat limited, as a 2011 US law restricts it. Nonetheless, Chinese space scientists said on Monday that they had exchanged landing data from Chang'e-4 with NASA, SMCP noted.

However, the Queqiao satellite has come under scrutiny from some sections of the US defense sector, with Jeff Gossel, the senior intelligence engineer in the Space and Missile Analysis Group at the US Air Force's National Air and Space Intelligence Center, sounding the alarm last October that the communications satellite's unique orbital position was the optimal place from which to launch a prospective attack on US geostationary satellites.

Quequiao sits at the Lagrangian-2 point, a location about 279,600 miles from the Earth, a spot just beyond the moon where a gravitational equilibrium can be maintained between the two bodies (all two-body systems have five such locations around them). That means Queqiao doesn't orbit the moon, it orbits a small location just behind it — pretty ideal for a communications satellite.

What Gossel feared was that Queqiao's position would also enable it to support a sneaky, gravity-hooking attack on US intelligence and communications satellites.

That raises the question: is Gossel's warning just idle speculation, anti-China xenophobia fueling the push for more spending on space weapons, or did the US request use of the satellite and probe in order to keep a closer eye on it?

China's got big plans for lunar exploration. Sputnik has reported that CNSA plans on sending more probes to both of the stellar body's poles by the end of the decade and, in the longer term, building a permanent lunar base, Li Guoping, director of the Department of System Engineering at CNSA, said at the World Conference on Science Literacy 2018 in September.

The space program also hopes to have a new space station in Earth orbit by 2022, which "will potentially supplant the International Space Station (ISS), if funding runs out for that," Dr. Malcolm Davis, senior analyst in defense strategy and capability at the Australian Strategic Policy Institute, told the UK Express for a Monday story.

"China is a rising superpower, and they are clearly challenging the US in space leadership," he warned, noting that, by contrast, "There is a lot of despair about a lack or direction and strategy in NASA."

"Part of the fault lies with the US government of the day, which constantly shifts the focus from Mars to the moon and back again, combined with a lack of funding," he noted. "NASA has a responsibility to lead and develop coherent policy, and it is just not doing that. So we have, for example, NASA spending a huge amount of money on their Space Launch System (SLS) — a new vehicle but an old concept, rather than embracing new technologies."

"Essentially they are recreating the Apollo missions, but they lack the willingness to go the next step and put astronauts on the lunar surface with the space gateway — a concept that does not really have a purpose. So if China makes rapid progress in terms of its lunar missions, such as Chang'e-5 and their space station, and ultimately to put Taikonauts on the lunar surface, then this will generate the incentive for NASA to get it together and not get left behind," Davis noted.

The analyst further noted that as NASA falters in this field, commercial entities like SpaceX and Virgin Galactic are rising to fill the void, but warns, "There is a distinct possibility that the next humans on the moon could either be commercial astronauts or Chinese."

"I am not sure how NASA could handle that."