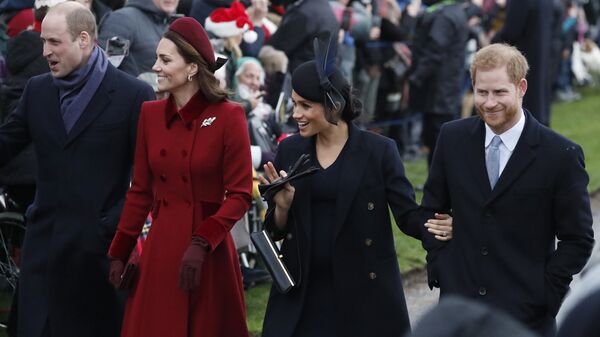 Netizens have been following the relationship between Meghan Markle and Kate Middleton trying to get a feel for the tensions between the royals. The British has media has fuelled the buzz with leaks, citing sources close to the court, while some have suggested the alleged feud has impacted the bond between the two brothers, considered to be close.

The British tabloid Daily Express has flared up the rumours about the tensions between Princes Harry and William’s families turning heads to the brothers’ “first serious rift”, dating back to the 2000s, according to a royal biographer. The outlet cites revelations from Katie Nicholl’s 2010 book “William and Harry” that they had a row over an incident in the younger brother’s turbulent youth, namely underage drinking at a village pub close to the royal residence of Highgrove House amid reports of smoking marijuana.

Although he escaped an official police warning, it shook the family and resulted in “the catalyst for the first serious rift between William and Harry, who resented the fact that he had been blamed for everything while William got away scot-free”, the biographer claimed.

She pointed out that it was William who was a regular there and even “downed pints of snakebite while enjoying a rather un-regal burping competition".

"The suggestion that the second-in-line to the throne should be caught up in such scandal was unthinkable; instead it was Harry who took the flak”, she insisted.

However, she stated that William tried to repair their relations, feeling guilty that Harry took all the blame, and eventually managed to overcome it.

"For the first time their relationship really suffered and they barely spoke. In the end, he forgave William because it wasn’t really William’s fault, but it took some time. Harry was reeling for a while”, the writer claimed, citing an unnamed former aide.

This incident has been brought into the spotlight amid circulating rumours about alienation in the Royal Family because of an alleged rift between Megan Markle and Kate Middleton and prompted mixed response online as some slammed the media for hunting for cheap clicks.

Pathetic click-blait. Why don't you report something that is real, like the reality of Brexit! Stop spreading your lies!

​Although both couples showed a united front during the traditional Christmas service with the Queen, the debates do not seem to be ebbing, fuelled by the recent revelation that Harry and his pregnant wife did not attend a party for the Duchess of Cambridge, Kate, who celebrated her 37th birthday with her husband and close friends last week.

Over the last year, numerous reports in UK tabloids have claimed that the Royal Family has been driven apart by a family feud. One of them suggested that American actress-turned-duchess Markle left Kate Middleton in tears over her demanding nature during a dress fitting for Middleton's daughter, Princess Charlotte.