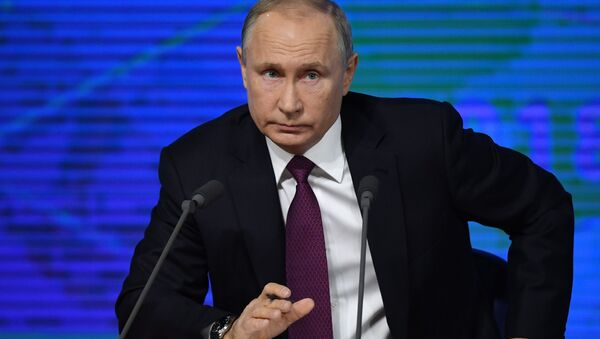 Russian President Vladimir Putin said in an interview with Serbian media published Wednesday that Russia does not want a new arms race.

NATO Could Trigger Article 5 in Event of Alleged Russian Cyberattack - Reports
According to the Russian president, Moscow sent to Washington in December certain proposals on maintaining the INF Treaty. Moreover, Putin said Wednesday that Russia is ready for a serious dialogue with the United States on the whole strategic agenda.

INF Treaty: Trump Feels the Need to Show 'Aggressive' Stance to Russia – Scholar
During the interview, Putin also urged Western partners to establish a dialogue based on the principles of international law. According to Putin, this is the key to keeping global peace and regional stability intact.

NATO Chief: February Deadline ‘Last Chance’ for Russia to Comply With INF Treaty
Putin spoke with Serbian newspapers ahead of his trip to the Balkan country. He said that Serbia’s decision to become closer to the European Union would not hinder “multifaceted cooperation” between Moscow and Belgrade.

Germany to Oppose New Missiles in Europe if US Scraps INF Treaty - Minister
Moscow and Washington have repeatedly blamed each other for violating the 1987 nuclear pact, which banned ground-launched ballistic and cruise missiles with ranges between 311 and 3,417 miles.