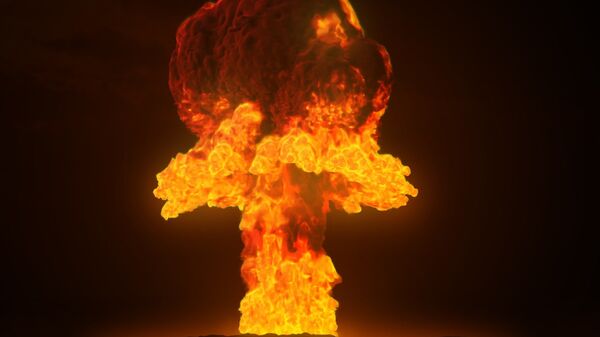 Following the US nuclear attacks on Hiroshima and Nagasaki, it became apparent that nuclear weapons wield unspeakable power. However, it was also apparent that nuclear devices had a remarkable potential for miniaturization, so much so that a nuclear bomb ended up as a charge that could fit into a backpack.

The initial attempt to make a smaller bomb turned out to be remarkably successful: the smallest devices of atomic annihilation could fit into field artillery or even a recoilless rifle, a precursor to an RPG. There was one problem, however: its blast radius was much larger than the projectile's range. Firing this kind of ordnance would have effectively annihilated all of the enemy, along with all of your own.

Russia
NATO Expansion in EU a Cold War Relic: Putin Says Russia Doesn't Want Arms Race
During the Vietnam War, the US military came up with a different idea. What if one made a slightly bigger bomb that can fit into a backpack? A soldier could carry one deep behind enemy lines, and then use it to destroy sensitive enemy facilities. Well, the military did exactly that, with one catch: the soldier was not supposed to evacuate before detonation.

"We all knew it was a one-way mission, a suicide mission," Mark Bentley, who served in the US Army at the end of the Vietnam War, told the Green Bay Press-Gazette.

Bentley was one of the would-be suicide bombers who would have gone on a mission to detonate a backpack nuke.

According to Bentley, it was never intended that a soldier would run away from his atomic charge.

US once made a 1kt nuclear bomb backpack for paratroopers to drop into the Soviet Union with pic.twitter.com/QRP6NMh0lk

​"The Army is not going to set a bomb like that and run away and leave it, because they don't know if someone else would get ahold of it," he said. "They have to leave troops there to make sure it's not stolen or compromised, and that would just be collateral damage. You didn't go out with the thought that it was anything other than a one-way mission. If you're Bruce Willis, you get away, but I ain't Bruce Willis."

The bomb, Special Atomic Demolition Munition (SADM), was a backpack-carried version of the W54 nuclear warhead also used in Davy Crockett recoilless nuclear gun, the lightest nuclear warhead the US ever made.

Iran Moves Toward New Uranium Enrichment – Iranian Nuclear Chief
According to John Sharpless, a retired University of Wisconsin-Madison professor, the US viewed Soviet Union as an aggressive warmongering force willing to annex the Europe at any moment. Neither Europe nor the US had a ground force big enough to stop the advancing Soviet army, he says.

"When you consider the possibility of war in Europe, if the Russians decided to invade from the east, it would be nearly impossible to stop them," Sharpless said.

Therefore, one of the defensive plans involved using the nuclear devices at certain areas to create "no-go" areas, forcing the enemy troops into bottlenecks.

"That was the apparent strategy with the hand-carried nukes, Bentley said — not to nuke Russians directly, but rather to nuke big holes in the Alps, so that all the resultant ash would fill up the valleys and prevent Soviet tanks and trucks from being able to pass, he said," Army Times writes.

Bentley never got to see Europe himself. For all his time in the Army, he only trained for a possible Soviet invasion in Virginia, using a dummy version of the SADM, for which he only set the timer once.

"You set your timer, and it would click when it went off, or it went ding or I forget what, but you knew you were toast," he said in the interview. "Ding! Your toast is ready, and it's you."

US Army Funds Help Win Academy Award for Tech Achievement
However, other than the possibility of being evaporated by your own nuclear device in the case of an actual all-out war, Bentley said his time in the Army was among the greatest experiences in his life.

"It was a great place to be stationed," he said. "Being a history nut, I had battlefields to visit… Jefferson's home at Monticello, Madison's home a couple miles away. We went camping on weekends, at Bull Run. How many people can say they camped at Bull Run, at a national Civil War battlefield?"

The concept of SADMs was eventually abandoned by the military. While the exact reason has never been stated officially, Popular Mechanics provide two plausible ones. First, a soldier carrying a nuclear bomb was way too vulnerable. He could have been hunted down before he had a chance to set off his bomb, compromising the mission. A nuclear-armed jet plane was considered a more reliable option.

Second — and this is true for any tactical nuclear weapon — the enemy could use nukes of his own in response. This could have easily escalated from tactical explosions on a battlefield into an all-out nuclear apocalypse, so the benefit of a single mission was too small, considering the possible ramifications.