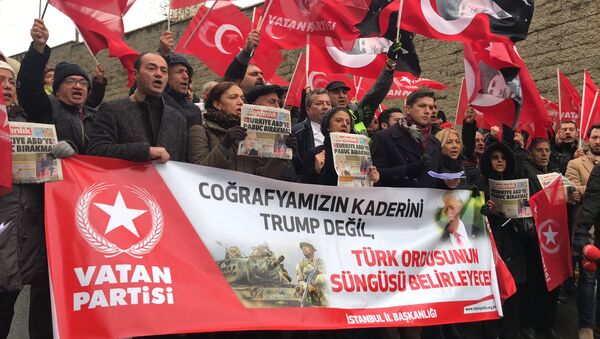 Tensions over the Kurdish issue have been running high between Turkey and the US in recent days, with Donald Trump threatening to "devastate" the Turkish economy in the event of an attack against US-backed Kurdish militias in Syria.

A protest against Donald Trump, organized by the Turkish non-parliamentary left-wing nationalist VATAN party, took place today in front of the US Consulate in Istanbul.

Dozens of people, outraged by Trump’s threats to impose economic sanctions against Turkey in the event of a military operation against Kurdish forces in Syria, took part in the protests. They were holding banners and chanting slogans like “Damn American imperialism!” or “Turks and Kurds are brothers, America is a traitor”. 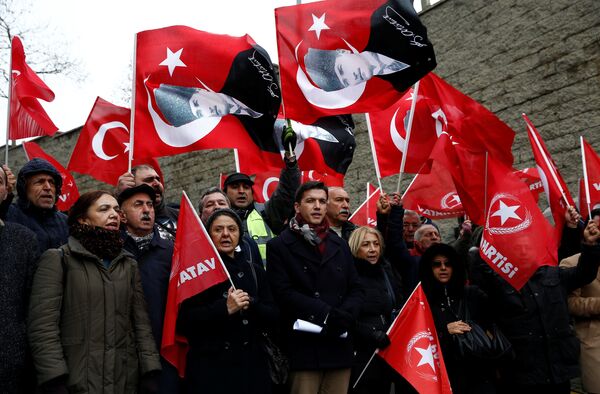 Members of Vatan (Patriotic) Party wave Turkish and the party flags during a protest against U.S. President Donald Trump near the U.S. Consulate in Istanbul, Turkey January 15, 2019
© REUTERS / Huseyin Aldemir

As part of the event, Cem Dikmen, leader of the Istanbul branch of the VATAN party, delivered a statement to the press. In particular, he said that Trump, on his Twitter page, “was openly threatening Turkey with sanctions in the event of a strike against the Kurds, and demanded the creation of a security zone”. Dikmen also added that the United States and their agents are responsible for the killing of the Kurds.

“Turkish people have always lived and fought together with the fraternal Kurdish people. No one can break this fraternity”, he said

According to Istanbul’s VATAN party leader, Turkish armed forces are conducting military operations against “US terrorist agents” – the Kurdistan Workers’ Party (PKK) and the Democratic Union Party (PYD), which “deceive and betray our Kurdish brothers”.

​Cem Dikmen believes that the success of this struggle will free the Kurds from the threat of a terrorist corridor.

“With their lies, the Unites States is trying to hide its own crimes, but they won’t succeed in doing this”, Dikmen added.

In his statement, the politician noted that it’s not Trump’s tweets and the US’ dirty policies, but the resilience of the Turkish people and the strength of the Turkish Army that determine the fate of the region.

“The United States has suffered a defeat in Syria and is now trying to disguise it with blind threats and pressure”, he said.

“Once again we appeal to the US authorities. We call on them, instead of threatening Turkey, to order the terrorists they’re providing with weapons to surrender to the Turkish Army. The success of our army’s previous operations has proved that they just stand no chance”, he concluded.