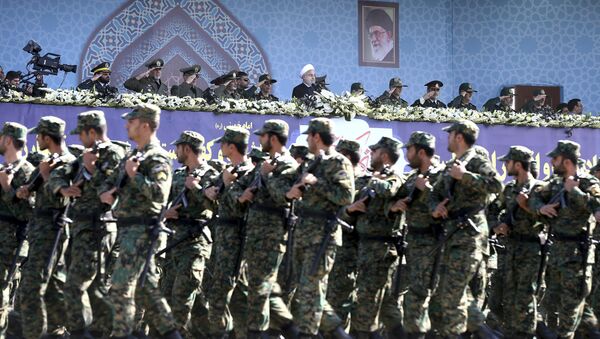 The EU has shot itself in the foot by imposing restrictions against the Islamic Republic of Iran, as it risks losing an important partner in its struggle against international terrorism, former Iranian deputy defence minister and military analyst Ali Reza Akbari told Sputnik.

By introducing groundless sanctions against Iranian citizens, the EU is pushing Tehran to respond, military analyst and former Iranian Deputy Defence Minister Ali Reza Akbari told Sputnik Persian, suggesting that Europe "will pay a very high price for the lack of cooperation with Iran in the field of intelligence".

On 8 January, the EU froze the assets of two Iranian citizens and the country's intelligence unit under the pretext of supposed assassination plots on European soil.

In response, Tehran stated that it would "proportionally respond to the decision of Europe". In particular, the Islamic Republic of Iran (IRI) has threatened to reconsider cooperation with European countries in the intelligence and security field.

"For many years Iran has faced the problem of international terrorism", Akbari said. "And in this vein, we tried to establish cooperation with various countries, including the EU. This cooperation was valuable not only for Iran, but also for Europe itself".

However, during this time, subversive activities by a number of terrorist organizations, including Mujaheedin-e Khalq (the People's Mojahedin Organization of Iran), have only increased, according to the former Iranian official. He emphasised that the situation especially deteriorated in the period when EU countries had imposed sanctions on the Islamic Republic.

"In fact, such actions indicate the power and authority of the political lobbies of these terrorist organizations, capable of putting pressure on Iran at the level of European governments", Akbari opined. "However, Iran's patience has its limits. When we face such an impudent position on the part of the EU, we cannot but react".

Iranian Foreign Ministry Summons Polish Diplomat Over 'Anti-Iran' Summit
The former official explained that Tehran had invested heavily in the programme to combat drug trafficking from Afghanistan to Europe for many years. He bemoaned the fact that European sanctions imposed against the Islamic Republic were disrupting this effort.

"If Iran weakens defences and decreases the intensity of struggle, drug trafficking to Europe will increase significantly", he warned.

The military analyst underscored that at the same time, Iran must also ensure the security of its own people.

"However, European countries such as France, Belgium, the Netherlands have given shelter to the terrorists who killed hundreds of innocent children and women in Iran, and do not take any action to punish these criminals", he pointed out.

According to Akbari, the EU should take into account that Tehran's refusal to co-operate will result in a great loss for Europe, given the important intelligence on the region that the Islamic Republic possesses due to its specific geopolitical position.

"This is especially true of data on possible camps and the location of terrorists like Daesh [ISIS/ISIL*]", he underscored. "Many militants come to Europe or come from European countries. Valuable information about these terrorists possessed by Iran is important for the EU".