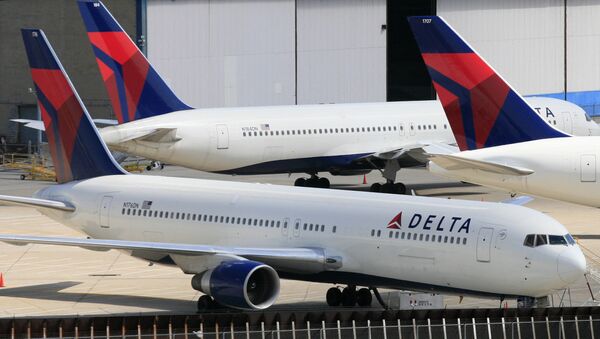 © AP Photo / Mark Lennihan
Subscribe
International
India
Africa
The partial US government shutdown, which is headed toward day 26, is now being blamed for imminent revenue losses that Georgia-based Delta Air Lines says could amount to an estimated $25 million for the month of January.

Ed Bastian, chief executive officer at Delta, discussed the projected losses on CNBC Tuesday, explaining that the shutdown has caused the airline to experience a significant decrease in the number of government contractors and employees who seek to "keep climbing" with the company.

"We encourage our elected officials to do their very best to resolve these differences as quickly as possible. We're not taking sides on the debate, but we need to get the business moving again," Bastian said, noting that the company's airliners were undergoing certification delays as a result of the US' Federal Aviation Administration shuttering some inspector functions.

The current shutdown is now the longest of its kind in US history, surpassing the previous record of 21 days, which was set during the Clinton administration. The shutdown was triggered after US lawmakers failed to provide US President Donald Trump with funds for his long-promised wall along the US-Mexico border.

Addressing reports of travelers experiencing extended waiting periods at various airports across the US, Bastian also noted that Delta employees are lending a hand by assisting security officials of the US' Transportation Security Administration with "non-security functions."

"Certainly we're seeing longer lines in the airport… But broadly, I think it's sporadic," the CEO said. "Delta is stepping in; we're providing a lot of people in the [security] queues, helping to take any of the non-security functions off of the TSA's hands to the extent that we can."

"I think it's hopefully going to be relatively smooth traveling for our customers," he added.

Trash, Truants, Toilet Paper: Government Shutdown Wreaks Havoc on National Parks
Sputnik previously reported that several airports over the weekend were temporarily forced to close their concourses due to staffing issues sparked by the shutdown, and that travelers were forced to wait at security checkpoints for more than an hour in certain cases.

Staffing setbacks are also the result of fed-up TSA agents submitting their resignation letters over the agency's failure to pay for their work and by federal workers opting to call in sick as a form of protest.

"Every day I'm getting calls from my members about their extreme financial hardship and need for a paycheck," TSA Council President Hydrick Thomas told Yahoo Finance. "Some of them have already quit, and many are considering quitting the federal workforce because of the shutdown."

Recently, reports surfaced detailing an incident earlier this month in which a Delta traveler managed to get through a TSA checkpoint and fly from Georgia's Hartsfield-Jackson Atlanta International Airport to Japan's Narita International Airport with a firearm. In a statement to Sputnik, TSA Spokesperson Thomas Kelly did not indicate whether or not the weapon was loaded.

With no end of the shutdown in sight, financial policy analyst Daniel Sankey told Sputnik on Tuesday that Delta's losses are expected, as furloughed workers are choosing to "go with the essentials."

"The contractors have been mostly laid off as soon as the shutdown started, and now the government employees are missing their first paycheck. Imagine all the industries that these employees stimulate: airlines, restaurants, groceries, clothing and much, much more," Sankey said. "Going out to dinner on a Saturday may go from a weekly event to an unaffordable luxury."

"When a government shutdown occurs, at first it can feel like nothing is happening. The TSA still shows up, and the price of milk stays the same. However, we're in the middle of a dangerous economic experiment," he added. Predicting what steps Delta may take to make up for its losses, Sankey told Sputnik that the airline may either layoff its employees or start cutting their benefits.