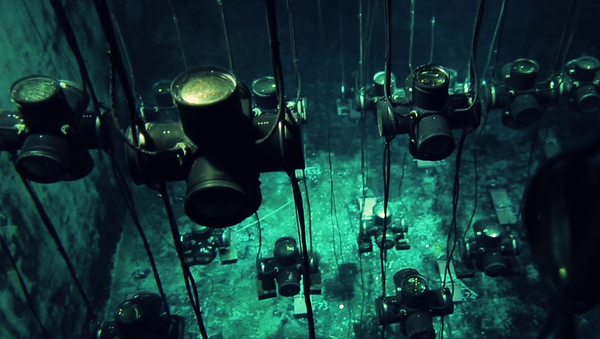 The excavation and construction of China's Jiangmen Underground Neutrino Observatory in the Guangdong province recently wrapped up, bringing researchers one step closer to being able to further examine neutrinos and their mass hierarchy.

According to the Scientific American, neutrinos are subatomic particles with a mass close to zero that very rarely interact with normal matter. Although they are one of the most abundant particles in the universe, they are extremely hard to detect. Presently, only three flavors of neutrinos have been confirmed: electron neutrino, muon neutrino and tau neutrino.

China's laboratory, situated some 700 meters below the ground in order to avoid disturbances from cosmic rays and sounds, will include a 20,000-ton "spheroidal facility" where researchers can analyze neutrinos, the Asia Times reported. The lab is expected to start running trials in 2021.

"Neutrinos are one of the fundamental particles that make up the universe," Xu Donglian, a physicist with the lab program, said after the latest development was announced at the Shanghai Jiaotong University.

"The findings of the neutrino mass hierarchy will help us learn more about the universe, such as the evolution of stars and black holes as well as the detailed structure of the core of the Earth."

With an estimated 600 scientists set to participate in the research, the project will also attempt to more accurately measure neutrino oscillations, a phenomenon that occurs when neutrinos change from one form to another.

Officials will also be observing and studying neutrinos emitted from different sources, such as the sun, supernovas, inner Earth and other sources. They're also studying the process of nuclear decay and dark matter detection.

For the duration of the project, which is expected to run for a minimum of 20 years, scientists will be partnering with officials from nuclear reactors in the Yangjiang and Taishan counties to collect neutrinos.

Oscillating Neutrino Discovery Could Shed Light on Origins of Universe

"After experiments start in our Jiangmen lab, we will be able to unravel the mystery of the universe and answer a number of fundamental questions related to cosmology and physics, such as the neutrino mass hierarchy and the supernova burst mechanism," Wang Yifang, director of the Jiangmen program and the Chinese Academy of Sciences' Institute of High Energy Physics.

Officials first broke ground on the underground lab in January 2015, which at the time garnered the interest of some 320 scientists, Xinhua reported. Once fully operational, the Jiangmen facility will become the country's second neutrino lab, with the first located in the Jinping Mountains in Sichuan.