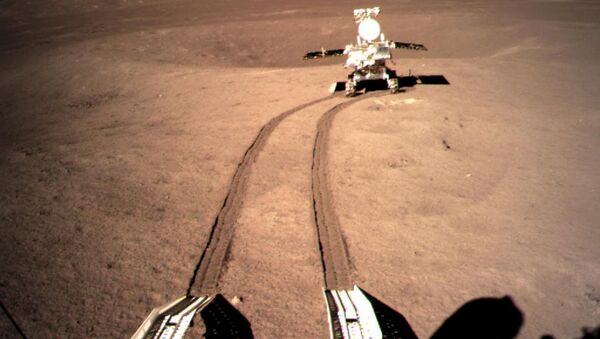 The robotic probe landed in the unexplored South Pole-Aitken basin on 3 January and sent the first ever images of the dark side of the Earth’s natural satellite. Chang'e-4 is set to enable studies of the lunar surface's mineral structure and of the lunar mantle.

China's Spacecraft Makes the First-Ever Landing on Moon's Dark Side - Reports
The China National Space Administration (CNSA) announced last week that the Chang'e-4 mission to the far side of the moon was an unconditional success.

The lunar rover Jade Bunny-2, which "slept" for seven days, 'woke up' on 10 January and is ready to continue its own mission on the dark side of the moon. According to CNSA, both lunar rovers were in a stable condition, and everything was going according to plan.

The director of the Space Research Institute of the Russian Academy of Sciences, Anatoly Petrukovich, has explained the biological experiment that was carried out on board of Chang'e-4, where two containers were placed —one with potato seeds and the other with silk moth larvae.

"This simplified biosystem is expected to be self-sustaining, with one part releasing dioxide gas and the other releasing oxygen. And they will compensate each other. Whether it will be able to operate for long, is an interesting scientific task. This is a very interesting experiment, since all the Earth systems are very much complicated", Petrukovich said.

Roscosmos Selects Super-Heavy Rocket Concept Designed for Moon Flights - Source
The Chang'e-4 was launched from the Xichang space center, located in the southwestern Chinese province of Sichuan, on 7 December 2018.

In 2021, Russian spacecraft Luna-25 is expected to land near the southern lunar pole, supposedly rich in ice. A range of other missions are expected to follow.

Soviet spacecraft Luna-3 was the first ever to photograph the far side of the Moon in 1959.