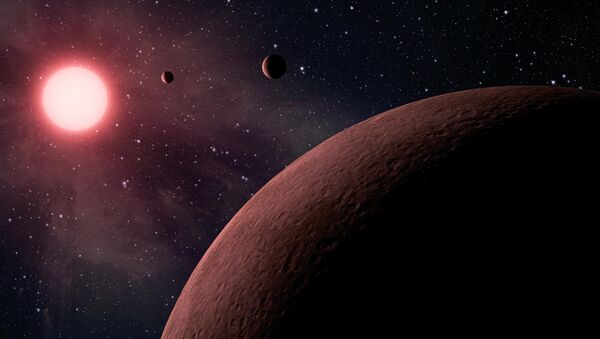 © NASA . JPL-Caltech
Subscribe
The only problem is that the planet is very, very cold.

A giant super-Earth — a planet whose mass is larger than Earth's, but smaller that of Uranus and Neptune — located "mere" six light-years away from us, may harbor extraterrestrial life, according to by Villanova University researchers.

The planet, called, Barnard b, orbits an old red dwarf called Barnard's Star, which is no longer capable of producing enough heat to warm the planet because of its old age. Therefore, the average temperature on the planet's surface is believed to be around —150 degrees Celsius — similar to Jupiter's moon Europa.

However, the planet is likely to have a hot metal core, which, combined with powerful geothermal activity, may generate enough heat to sustain primitive life forms deep down below the surface.

"Geothermal heating could support 'life zones' under its surface, akin to subsurface lakes found in Antarctica," says Edward Guinan, an astrophysicist from Villanova.

Dark 'Shadow' Spotted Over Earth Spawns Alien Planet Conspiracy Theories
What the scientists do not know right now is whether there is actually water on the planet, which is believed to be essential for sustaining life.

"Barnard's Star has been on our radar for a long time," Guinan said, according to a Daily Mail report. "The most significant aspect of the discovery of Barnard's Star b is that the two nearest star systems to the sun are now known to host planets. This supports previous studies based on Kepler Mission data, inferring that planets can be very common throughout the galaxy, even numbering in the tens of billions."

At 9 billion years old, Barnard's Star is about twice as old as our sun, which has been around for 4.6 billion years.

"The universe has been producing Earth-size planets far longer than we, or even the sun itself, have existed," Guinan said.

Alien life could exist on frozen and rocky 'super-Earth' Barnard b just six light-years away from us, study finds. pic.twitter.com/30cuVofQOV

​Barnard's Star is the second closest system to the sun; only Alpha Centauri is closer at its four light-year distance. The existence of Barnard b was confirmed after two decades of observations using a large variety of telescopes and instruments. Unfortunately, even the most powerful telescopes are unable to directly capture images of a planet located so far away, the Daily Mail notes.