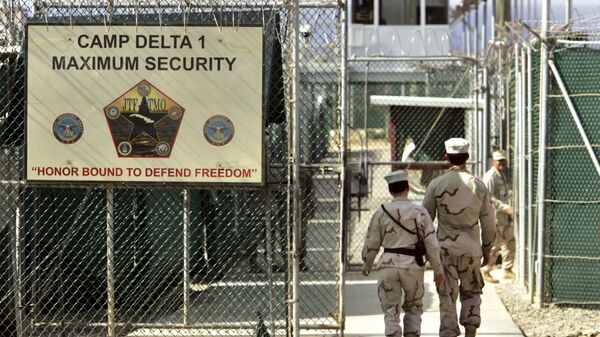 © AP Photo / Brennan Linsley
Subscribe
The US military has sent a special live-in cell, big enough for a wheelchair and bed, to accommodate a detainee with a chronic back injury at the Guantanamo Bay detention center. The cell will allow him to sleep adjacent to the courtroom and be present for his trial without having to sit in painful positions.

Last September, the hearing of a 57-year-old Guantanamo inmate called Abd al-Hadi al Iraqi was postponed after he was unable to continue, suffering "severe back spasms" for days "when he's tried to sit up for any length of time, requiring him to lie down immediately," civilian defense attorney Adam Thurschwell told McClatchy at the time. Previous hearings in June and August had also been cancelled, based on the recommendations of a prison doctor.

"Can we not just let Nashwan get better?," asked Hadi's defense attorney, Air Force Maj. Yolanda Miller. "Every time we try to comply with the government's schedule, the government's request we eventually end up retarding his progress."

Hadi, who says his real name is Nashwan al Tamir, has suffered from a degenerative disc disease since before he was apprehended by the US in 2006 in Turkey. Originally from Iraq, Hadi is accused of being an upper-level official in al-Qaeda who commanded and paid insurgent fighters in Afghanistan to attack US soldiers and civilian workers in the country following the October 2001 invasion led by the United States. He has been at Guantanamo since 2007 but was only charged in 2014. He could face a life sentence if convicted.

Since arriving at Guantanamo's Camp 7, a section of the base set aside for former CIA captives, Hadi's back condition has worsened, which his lawyers attribute to his treatment there. When he complained about back pain, doctors treated it with pain killers and back ointment. He's had five spinal surgeries since then, the most recent last May, and they have left him unable to sit up for long periods of time. Attempts to force him to be present in court have led to his evacuation for medical treatment, and even an episode he regarded as very humiliating, when he passed out from the pain killers given to him, the Miami Herald reported.

On Friday, the court at Camp Justice, also inside the base, announced that an extra large holding cell with a video feed would be placed adjacent to the court, so that Hadi could be present for his hearing and able to communicate with his attorneys during his trial without having to be present, and upright, in the courtroom itself.

"He will be able to get his wheelchair in there. His hospital bed will be in there. It will have the toilet in there with the sink. You know, if it doesn't have the appropriate handrails or grab rails, we'll have those installed. So, yes, it should, it will accommodate him," Yamashita said.

The decision represents a reversal of existing camp policy, the Herald noted. Yamashita's predecessor, Army Col. Steve Gabavics, stood in the way of similar accomodations for other Guantanamo inmates, saying it was impossible to provide.